Do the English really have bad teeth?

While looking for interesting items from our collections to show a visiting group of dental professionals, I came across these examples of dentists’ advertising cards in our Ephemera Collection. 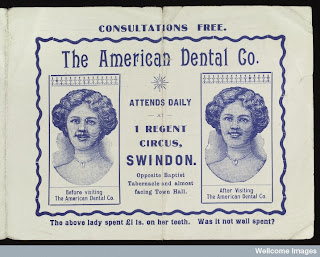 All dating from around the early 1900s, they demonstrate an intriguing persistence in design. A young woman is depicted in ‘before and after’ shots in which her blackened teeth are transformed into a perfect smile. In two of the cards the pictures are helpfully labelled to reassure you that the dentist will restore you smile, not leave you toothless. The design becomes faintly ridiculous when it is applied to a photograph where the blackened teeth are obviously faked. 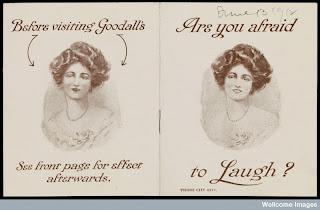 Apart from the glimpse of advertising in its unsophisticated infancy, the cards also offer an interesting comment on the fashion of the time. The hair, jewellery and dress of the young women is virtually identical in all three cards, and one wonders if they might have been modelled on some famous beauty of the time? 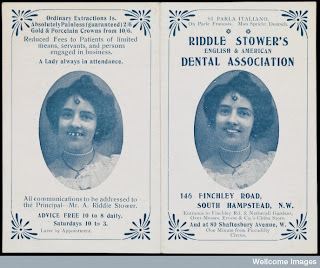 The other thing that caught my eye was the reference to American dentistry (viz. “American Dental Association” and the “American Dental Co”) in the names of English dental practices. Investigating the dental ephemera material further, I found other references to American dentistry from the 1890s. London based dentist J. Shipley Slipper [1] recalls that:

an American dissenting minister called upon me yesterday… if he had been an Englishman he wouldn’t have had a tooth left in his head. As it was he had nearly all of them, only they had been stopped

And an American dentist also based in London, Dr Edwin L. Shattuck produced a booklet [2], in which he noted that:

The British public seem generally left far and away behind other countries and especially America as regards [dentistry]. The present uphill struggle is due to the antagonism of old-fashioned English dentists who are content with the old systems laid down by their fathers and probably their grandfathers.

A little historical research reveals that the high regard for American dentistry in the UK around this time goes back to the Great Exhibition of 1851 in London, when American dentists won top honours for their displays of artificial teeth, crowns and bridgework. At the end of the nineteenth century there were nine dental colleges in the United States, in Europe there were none [3]. The term ‘American Dentistry’ then, became synonymous with modern practices and high quality procedures, resulting in the many American style practitioners at the turn of the century, many of whom had little or no connection to American training. Dr Shattuck warns of this in his booklet:

I warn patients against all so-called American dentists whose qualifications will not bear the light of day. It was possible some years ago for Englishmen to obtain a sham degree from America for the large sum of $10… styling themselves ‘American dentists’.

It’s fascinating how ideas persist in societies, long after the original circumstances have disappeared or been forgotten. It would seem that those jokes in American films and TV programmes about the English having bad teeth might have had some basis in truth, at least at the end of the nineteenth century when American Dentistry became mark of high quality, even amongst the English.