On this day one hundred years ago, Florence Nightingale died. As such, we have chosen to mark the day by considering the collections held in the Wellcome Library pertaining to a woman who is still one of the most recognisable names in the history of medicine.

Our collections include a sizeable amount of Nightingale’s correspondence: hundreds of letters whose date-span covers almost the whole of her long life. The letters cover her career and interests, including her attempts to become a nurse despite the protestations of her family, her famous service during the Crimean War and subsequent work reforming the training and practice of nursing, through to her other concerns such as sanitation, cottage hospitals and the use of medical statistics.

The last of these topics is illustrated by correspondence between Nightingale and William Farr (MS.8033). Farr was one of the leading epidemiologists of the nineteenth century, and collaborated with Nightingale in providing statistical evidence for sanitary reform.

To Nightingale, statistics was “the most important science in the world”. Statistics could be expressed in visual forms to put across important points, most famously in Nightingale’s case in the form of her diagram clearly illustrating how deaths from disease far outweighed fatalities caused by “wounds in battle” during the Crimean War (Click on image to enlarge). Diagram of the causes of mortality in the army. Wellcome Images No. L0041105.

Nightingale’s skills as a statistician were recognised when and she was elected as a fellow of the Royal Statistical Society in 1858 – the first woman to receive this accolade.

But our collections also illuminate ‘The Lady with the Lamp’ even when she’s not directly present. For example, the letter book (MS.8520) of Sir John Hall, Head of Medical Services during the Crimean War, gives us a less than flattering portrait of Nightingale. Far from being impressed with her reforms, Hall writes to his superiors defending the army medical services from her criticisms, including that her intervention deprived the army of perfectly good nurses who were working in the Crimean before her arrival. Hall pulls no punches in accusing Nightingale of arrogance and being an interfering busy body desperate for power, in short – to quote directly from his letters – a “petticoat imperium”. However, the romanticised representations of Nightingale – often in object form – of the late nineteenth century are mirrored in the visual representations the Library holds. Lithographs, prints and paintings, all putting a positive spin on Nightingale’s activities in the Crimean (where it should be remembered, she only spent 2 years of the nine decades of her life). These images though, help to illustrate how she was objectified and romanticised in the nineteenth century.

Nightingale’s life has been reinterpreted by each succeeding generation, with new biographers seeking to zero in on a new area of Nightingale’s life. For example, in Brian Dillon’s Tormented Hope: Nine Hypochondriac Lives (2009), Nightingale’s long period of convalescence after the Crimean War is analysed. Understandably, given the range and scale of our sources described above, many of these biographies – such as Mark Bostridge’s Florence Nightingale: The Woman and her Legend (2008) – have utilised our resources and on publication have gone on to find a space in the Library’s collections.

But perhaps we can leave the last word to Nightingale herself: not through her voluminous writings, but through her own voice, as the Library holds a recording, made in 1890 of Nightingale which aimed to raise money for the impoverished veterans of the Charge of the Light Brigade. Freely available to listen to online, Nightingale’s words bring together her involvement in the Crimean with reflections on her own posterity:

“When I am no longer a memory, just a name, I hope my voice may perpetuate the great work of my life. God bless my dear old comrades of Balaclava and bring them safe to shore. Florence Nightingale”.

(The story behind how this item came into our collections is worth exploring in more detail and its something we hope to return to in a future Blog post). 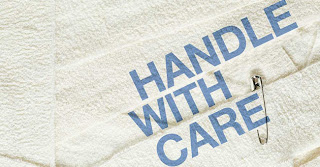 Florence Nightingale, her legacy and wider notions of nursing are also the subject of two forthcoming Wellcome Collections events. On the evening of Friday 17th September, Handle with Care explores the critical roles that science and the senses have played in nursing and midwifery and reflects on changes in practice, through film, theatre, music, talks and many hands-on activities. While on Saturday 18th September, Nightingale’s multi-faceted life will be explored at ‘Navigating Nightingale‘, a symposium organised by the Florence Nightingale School of Nursing and Midwifery, King’s College London, and featuring an array of expert speakers.

‘Handle with Care’ is a free event, while details on registering for ‘Navigating Nightingale’ are available through King’s College’s website.

One Response to Florence Nightingale Centenary