As announcements go, the following – made in the New York Sunnewspaper, on this day in 1835 – is a tantalising one:

GREAT ASTRONOMICAL DISCOVERIES
LATELY MADE
BY SIR JOHN HERSCHEL, L.L.D. F.R.S. &c.
At the Cape of Good Hope
[From Supplement to the Edinburgh Journal of Science] 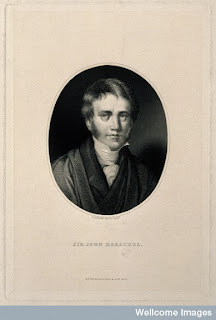 What was it that one of the most acclaimed astronomers of his day had observed? Must have been something of great scientific importance to have made the pages of the respected Edinburgh Journal of Science first…

The author of the report – serialised in six extracts – was given as Dr. Andrew Grant, who described himself in the New York Sun as a colleague and travelling companion of Herschel’s.

As for what Herschel (pictured left) had seen through his telescope, Grant’s claims were extraordinary: no less than evidence of life forms on the moon. And what life forms they were: unicorns, two-legged beavers and furry, winged humanoids resembling bats… Aside from the animal life on the moon, the articles also offered detailed accounts of the moon’s landscape (which included trees, beaches and rivers).

Although extraordinary, the style of Grant’s accounts fitted with the Sun‘s emphasis on clear narratives, indicative of the paper’s status as one of the new “penny press” papers.

Oh, and there was one small issue about Grant’s accounts – they were entirely made up.

Whilst Herschel was of course an astronomer – and had recently travelled to the South of Africa – Grant was not a colleague of Herschel’s but a fictional character. And the Edinburgh Journal of Science – as the Wellcome Library’s holdings for the title indicates – had stopped publishing a few years before. So – a ‘silly season‘ splash by the New York Sun? Well, something a bit more intriguing than that. Evidence suggests the stories originated from the pen of Richard Adams Locke, a Sun reporter educated at Cambridge University who had an important point to make: that being to satirise speculation on extraterrestrial life, which was popular at the time. Such writers as the Reverend Thomas Dick (pictured right), who made the case for a universe teeming with life forms in his work The Christian Philosopher and who claimed that the moon alone had over 4.2 billion inhabitants.

Were readers really taken in by the New York Sun‘s story? It’s said that the duped included a delegation of scientists from Yale University, who even travelled to New York in search of the Edinburgh Journal articles. The staff of the Sun then proceeded to send the scientists all round the offices of the newspaper in search of the bogus journals, before the delegation retreated back to Yale without realizing they had been tricked. It seems this story is also a fiction (after all, one would have expected the men from Yale to have checked with their own University’s Library staff first…).

Despite other newspapers commenting upon the hoax, the Sun never broke cover and admitted it had duped its readers. It did publish a column on the 16th September in which it discussed the possibility that the story was a hoax, but it never actually confessed to anything, writing “Certain correspondents have been urging us to come out and confess the whole to be a hoax; but this we can by no means do, until we have the testimony of the English or Scotch papers to corroborate such a declaration.”

For a more detailed account of this story, we refer readers to Matthew Goodman’s The Sun and the Moon: The Remarkable True Account of Hoaxers, Showmen, Dueling Journalists, and Lunar Man-Bats in Nineteenth-Century New York (2007), which you can find on our shelves. The Sun, continued to operate until 1950. It never did, however, produce a story as extraordinary as “The Great Moon Hoax” nor admit that this story was a hoax.

With thanks to History.com for alerting us to this anniversary.