Is Mr Scarlatti there? 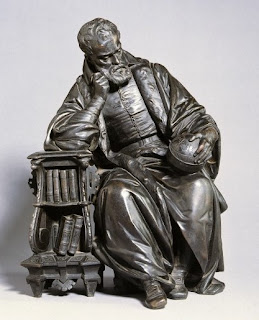 While walking through the Wellcome Library stacks to view a huge painting of Galileo, a scholarly visitor from Italy accompanied by a staff member happened to pass a shelf of miscellaneous items, among which was a bronze statuette (left, Wellcome Library no. 47279i). He stopped; the curator explained that the statuette had been acquired as a portrait of Christopher Columbus, but that, annoyingly, it was not mentioned in a book of Columbus iconography. [1] The visitor replied “But it is Galileo!”, with the same inner conviction as Galileo himself might have used had he really said (as the legend has it) “Eppur si muove!“.

Sure enough, further research showed that it was originally one of a pair of sculptures, of Columbus and Galileo, and that the names had been transposed. But this addition to Galilean iconography would never have occurred had the researcher not happened to pass it on his way to see something else. Of course it was necessary for there to be a mind (the visitor’s) prepared to see Galileo, contrary to the message he was getting from the library, that it was Columbus.

If it was catalogued as Columbus (as it was then, and in at least one downstream database still is), it would not have been found by searching the online Wellcome Library catalogue under the name of Galileo. That shows the value of giving our collections a certain plurality of approaches, including abundant metadata, exhibitions, study-access, online browsing, printed publications etc. — not to mention blogs. Like other organic creations, collections thrive on biodiversity, which permits intentional serendipity and lateral thinking, both by researchers and by the custodians of collections.

A good example of enterprising research is recalled by Colin White in his biography of the artist Edmund Dulac. [2] 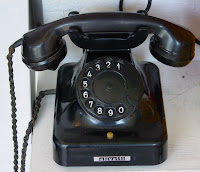 “There is a story, perhaps by now almost a legend, of how the eminent harpsichordist Ralph Kirkpatrick, when he was preparing his edition of the works of Domenico Scarlatti, wished to retrace certain original manuscripts. Knowing that Scarlatti, a Neapolitan, had worked in the Spanish court in Madrid, married, had children, and died there in 1758, Kirkpatrick reasoned that anyone in Madrid with the Italian name Scarlatti, might well be a descendent of Domenico. In a copy of the Madrid telephone directory, he found entries under ‘Scarlatti’ and eventually discovered in the attics of one of them the manuscripts he sought.”

White himself, “stealing this idea”, telephoned the old address of Dulac (who had died twenty years previously), spoke to the lady who was living there, and “from this nucleus came a chain reaction leading to places as widespread as Switzerland, the United States, France and Spain.”

There’s no harm in asking.