Item of the Month, September 2010: Articles of Partnership 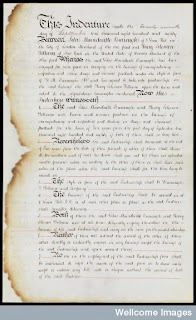 The document described the business partnership that the two men entered into. The business formed – Burroughs Wellcome & Co (BW&Co) – would by 1900 establish itself as a multinational pharmaceutical company. Indeed, the monetary means for Henry Wellcome to acquire his collections – and the existence of the Wellcome Trust itself – can be traced back to the partnership described in this six page document.

We have previously – and will no doubt continue to in the future – write posts on different aspects of Wellcome’s life, so it seems appropriate on this particular anniversary to say a little more about the man he entered into business with.

Born into relative prosperity in Medina, New York, Burroughs was the son of Silas Mainville Burroughs, Sr, an American Congressman. After working as a travelling pharmaceutical salesman Burroughs (Jnr) graduated from the Philadelphia College of Pharmacy in 1877. 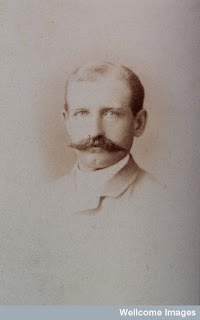 Employed as a salesman for the American pharmaceutical business John Wyeth & Bros – leaders in the new field of compressed pills – in 1878 Burroughs travelled to London and founded Burroughs & Co. This deal gave Burroughs sole rights to sell Wyeth supplied products outside the USA and also allowed Burroughs leverage to market and a range of other products under his own name.

As Burroughs’s sales exapnded, he sought help from a peer from the Philadelphia College of Pharmacy – Henry Wellcome. Wellcome at this time was working as a salesman for another pharmaceutical firm in the USA – McKesson & Robbins – and was building up a promising reputation amongst his peers. Through a series of letters from late 1879 to early 1880 – and now preserved in the Wellcome Library – Burroughs convinced Wellcome to move to London, perusading Wellcome that entering into partnership with him in England offered more prospects for success than continuing to work in the US.

No doubt due to the fact that he died in 1895, leaving Wellcome in sole charge of Burroughs Wellcome & Co – and perhaps also from the fractious business relationship the two men had by the time of Burroughs’ death – Burroughs’ role in the partnership has until recently been underrated.

Wellcome has traditionally been regarded as the marketing mastermind behind the company’s success. However, Burroughs was no mean salesman himself. For instance, it was Burroughs who introduced to the pharmacy trade in this country the notion of ‘detailing’ – explaining face-to-face to doctors and chemists the company’s products and passing on to them free samples. 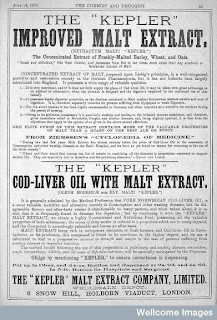 Also, before their partnership, Burroughs had added to the list of products he sold, two brands which would prove to be among the most successful for Burroughs Wellcome & Co: Hazeline (an extract of witch hazel, marketed as face cream) and Kepler malt extracts (to provide nutritional sustenance).

So, when the two men added their signatures to the document shown above, Burroughs was very much the senior partner: he had persuaded Wellcome to move across the Atlantic to London and had put up £1200 in relation to Wellcome’s £800. Over the next fifteen years however, and as their business would flourish, their personal relationship would wither. So let’s leave Burroughs and Wellcome in September 1880 with the ink still drying on their agreement and their futures ahead of them. The disintegration of their relationship can wait for another Blog post.

(For more on Burroughs the salesman, see the following article: Roy Church, ‘The British Market for Medicine in the late Nineteenth Century: The Innovative Impact of S M Burroughs & Co’, Medical History 2005 July 1; 49(3): 281–298 (available online through PubMedCentral) and the book Burroughs, Wellcome & Co.: Knowledge, Trust, Profit and the Transformation of the British Pharmaceutical Industry, 1880-1940 by Roy Church and E. M. Tansey (Crucible Books, 2007)).