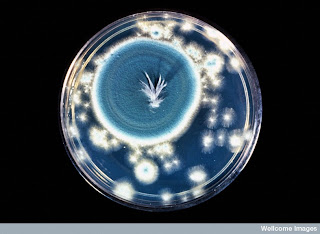 Last week, the Royal Mail launched a new set of stamps commemorating the UK’s history as a world leader in medical research. The set illustrates six medical breakthroughs from 1897 to 1971: the synthesis of beta-blockers; the discovery of penicillin; the first total hip replacement; artificial lens implant surgery, the discovery of the vector for malaria, and the invention of the CT scanner.

Wellcome Images supplied the picture that marks the discovery of the antibiotic penicillin made by pharmacologist Sir Alexander Fleming (1881-1955). It is a photograph of a petri dish containing the mould Penicillium notatum, a mould that began its fame as a contaminant in Fleming’s laboratory at St Mary’s Hospital, London. Fleming was a brilliant, if untidy, scientist who left the lab for a summer holiday in 1928 without washing his petri dishes. Upon returning in September, he discovered an invasion of blue-green mould in a dish containing the bacteria Staphylococcus. Where the mould grew, the bacteria didn’t.

Fleming’s subsequent experiments revealed that the mould exuded a substance that destroyed many disease-causing bacteria. Fleming named this substance penicillin. In 1945 he was jointly awarded the Nobel Prize in Physiology or Medicine with Ernst B. Chain and Howard Florey, who enabled the commercial production of the antibiotic during World War II. 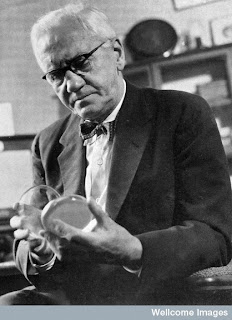 In its description of the new 58p stamp, The Royal Mail pronounces that Fleming’s “serendipitous observation began the modern era of antibiotic discovery.” Time Magazine named him one of the 100 most important people of the 20th century: “By the middle of the century, Fleming’s discovery had spawned a huge pharmaceutical industry, churning out synthetic penicillins that would conquer some of mankind’s most ancient scourges, including syphilis, gangrene and tuberculosis.”

The Wellcome Library holds some fascinating insights into Fleming, including Robert Fleming’s story of his brother’s life, held in the Archives and Manuscripts collection. Wellcome Film has digitised a short film featuring footage of Fleming called The discovery of penicillin. There are many portraits of him in Wellcome Images, including this pose with a petri dish similar to the one featured on the stamp that recognises his remarkable work – and his untidiness.