Stone brocades of fish and football

In any historical library, there is a continuous conversation between, on the one hand, the subjects discussed within the library’s holdings, and, on the other hand, the forms (vocabularies, media, genres, materials) in which those subjects are thought about, discussed, and transmitted. But this is particularly a feature of the Wellcome Library on account of its diversity of document-types –- not just monographs and runs of periodicals but … well, for pictorial documents alone, all of these, and more.

For convenience we usually turn a deaf ear to this dialogue, pretending (if we take examples of vocabulary) that “plague”, “anatomy”, “gout”, “cholera” and “consumption” have always had whatever meanings we want them to have today, regardless of context. [1] Still, it is worth occasionally eavesdropping on it, as we can learn valuable lessons thereby. Let’s look at an example of changing media within the field of colour printing. 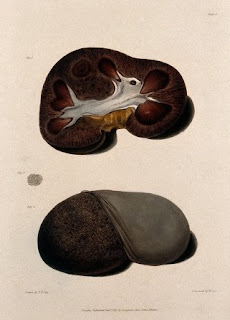 Printing in coloured inks may be taken for granted by the casual magazine reader of today, but that reader’s magazine can only be produced as a result of technical evolution over many centuries, and technology transfer over many thousands of miles. Before those procedures were developed, paper was printed in one colour (usually black ink on white paper) and then each copy was coloured by hand. That was the technique used for example in the anatomist Richard Bright’s 1827 depiction of the distinctive dark-chocolate-like kidney which he found in people with Bright’s Disease (as it was named soon afterwards). 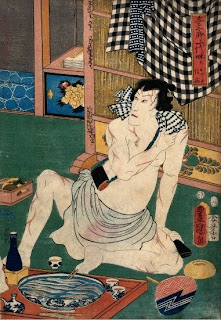 Japan has a long history of colour printing which can be studied in the Wellcome Library through colour woodcuts. There are currently about 700 Japanese woodcuts in the Wellcome Library catalogue, and others yet to be catalogued, in addition to Japanese printed and handwritten books. Unlike Richard Bright’s print, most of these woodcuts were actually printed in colours.

The example on the right, dated 1857, shows the actor Ichikawa Kodanji in character enjoying a summer meal. In order to show the different ceramics (teacups, ashtray, etc.) and papers (his fan alone is printed with papers of two different colours and designs), a different woodblock was cut for each colour, each block was inked with ink of one colour, and the same sheet of paper was printed from each of the blocks in turn. The technique was introduced by Harunobu (1725-1770) around 1765. [2]

Such colour woodcuts were called nishiki-e, or “brocade prints”, because the existing things which they most resembled were brocades or embroideries. In brocades the colour was not applied to the substance of the product but was inseparable from that substance. Just as no dying was needed for brocades, so no hand-colouring was needed for colour woodcuts: hence the latter were nishiki-e, brocade prints. 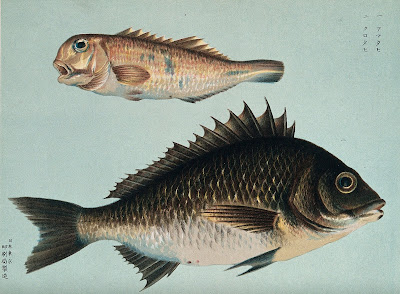 Above, Amatai (tile-fish); below, Kurodai (black porgy). English-language equivalents are approximate only. Colour lithograph, 1883-4. Wellcome Library no. 727281i

However, these fish (above), though also printed in colours, are something different. The print is one in a set of twelve colour prints in the Wellcome Library that were produced (in 1883-1884) not on a woodblock but by lithography. Instead of being cut on a woodblock, the design was drawn in waxy crayons on the surface of a very smooth stone, the stone was inked with ink of one colour, and a sheet of white paper printed from it. Just as in woodcut printing, so with lithography, each of the parts of the design (the blue parts, the yellow parts etc.) would have to be drawn on one of several stones. Of course it was essential to make sure that the registration of the paper was absolutely identical from stone to stone, otherwise the result would look like a Picasso from one of his discordant-planes periods. That was the tricky bit, but it had already been mastered in Japan by professional woodcut artists.

The same principle is used with modern rotary presses, in which the paper passes in succession between several sets of rollers, each one inked by jets emitting a different colour of ink. However our fish prints predate rotary presses: they were printed by hand on flat stones. If one looks at the original impressions closely, one can see the grain of the stone, especially in the black-inked parts.

Although the phrase nishiki-e was well established as referring to colour woodcuts, the publisher of the fish lithographs gave the collection the title Namima no nishiki, or “Brocades of the waves”, a title that radiates a rainbow of meanings. As viewers, we are invited by that title to consider the continuity with the traditional nishiki-e, the colour woodcuts. Then there is a reference to fish as lustrous polychrome marvels that coruscate as they dart through sunlit waters, whether carp in a Japanese water-garden or saltwater fish seen from fishing-boats in the Western Pacific. Their silvery and golden skin veined with red, blue and brown makes them shimmer like living brocades of silver or gold thread. And thirdly there is pride in the use of lithography, one of the new techniques introduced in the Meiji reign, which captures the gradations between these colours and shades as finely as the finest of silk threads, and more subtly than even the most revered traditional masters of colour woodcuts –- Kuniyoshi, Hiroshige, or Utamaro. 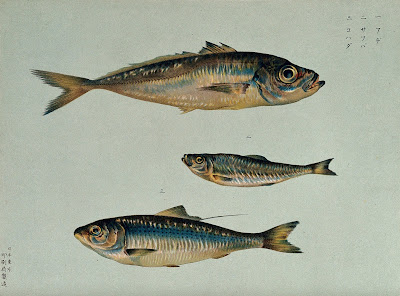 Our set of twelve fish prints from 1883-1884 was produced in Tokyo by the National Printing Company, a firm that now prints official documents such as banknotes and postage stamps – paradoxically, since nowadays those are almost the only two common types of print that are not produced by lithography (they are produced by gravure, from engraved metal plates: lithographs would be too easy to counterfeit). In a brief paragraph of introduction, the director speaks on behalf of the Japanese nation. We live, he says, surrounded by a rich ocean, which perpetually supplies us with a vast variety of fish. These fish play an important role in our daily diet. Although there have been many books published that describe the minute distinctions between the many similar types of fish, these are not suitable for didactic purposes. That is the main reason for the publication of these highly detailed prints of fish. The improvements made by the technique of lithography mean that finer details of the fish can be shown, and consequently we can correct and improve public knowledge of fish, the staple of life.

He is true to his word. Few colour photographs could today reproduce the textures and hues of these gleaming “brocades of the waves”. If any of the fish portrayed is or were to be thought to be extinct, these prints could be the models with which any suspected survivor might be compared. 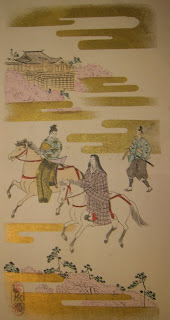 Left: a young woman rides on horseback accompanied by an older man on horseback and his servant on foot. Colour lithograph in the style of Tosa Mitsuoki, 1894. Wellcome Library no. 728888i

From a mere ten years later (1894) we have another set of twelve colour lithographs: very different. They were produced not in Tokyo but in Osaka, and they recall the courtly life of nearby Kyoto, the former seat of the imperial court. The subject matter is the sports, recreations and pastimes of the court, probably as narrated in some work of literature such as the Tale of Genji. The identities of the characters (and the name of the series, if there is one) still have to be worked out.

The compositions are stylised in imitation of the courtly works of Tosa Mitsuoki (1617-1691). The Tosa school was officially sponsored by the court to represent its standards of aesthetic exquisiteness, much as the Limbourg brothers did for the Burgundian court over a hundred years previously. As these prints show, it was still remembered and imitated into the Meiji era, no doubt with an element of nostalgia for the finer features of the pre-industrial life of the elite. 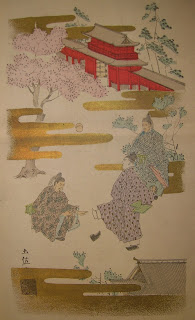 One of the prints (above left) shows a woman being taught to ride, and another (right) shows dignitaries playing kemari, a form of football – though not with due dignity, as one of the eminences has lost his shoe while kicking the ball. (A game of kemari features in the Tale of Genji, where a freak accident to a spectator plays a key part in the plot, but in this print no spectator is shown.) In every one of the twelve scenes, clouds lit by golden sunshine traverse the field of view at several different heights, a favourite device of the Tosa school (and of its Art Nouveau admirers). The ease with which lithographic printing in gold can represent the sheen of sunlight is exploited to the full by our artist. Years in the future, the techniques used to render these decorative patterns would lead to the colourful wrapping papers surrounding the millions of last-minute gifts on sale in Japanese railway stations, airports and kiosks.

The Tosa lithographs preserve an ancient Japanese subject and style by means of a modern technique. The pastimes of the elite are portrayed in a medium accessible to the mass market. The fish lithographs are from a decade earlier, but use a later style. To portray the staple diet of Japanese, they use a foreign technique, not much different from Austrian or German natural history prints of the same period. Historians have to try to keep in their heads a sense of what was “normal” (feasible and acceptable) at various periods, and for whom, but that requires an intimate knowledge of what actually existed, and when.

In addition to the Wellcome Library and many other repositories, students of the history of colour printing, such as Bamber Gascoigne, are fortunate to have a more specialized study collection: the magnificent Waddleton Collection, now the proud possession of Cambridge University Library. Norman Waddleton (1916-2008) was a patent agent who built up a collection of examples of colour printing: a good subject for him, as his profession depended on the discernment of small technical modifications of the type shown in the evolution of colour printing. Waddleton’s database lists not only items in his collection but also, valuably, items missing from his collection. His collection includes Japanese works, but our fish prints and the Tosa set (inasmuchas it has been identified so far) seem to have eluded him in both lists.

Just as colour lithography in the 19th century incorporated and in some ways surpassed the effects of woodcuts and engravings, so our own knowledge of the past evolves by building on the knowledge of our fellow-researchers such as Waddleton. These “stone brocades” have only just been added to the Wellcome Library catalogue this summer, but there are still in prospect many other additions that can refine the continuing conversation between message and medium.

Many thanks to Mitsui Takehito for his work on the fish prints.