The exhibition is open free of charge at the National Gallery in Trafalgar Square until Sunday 17 October (open every day 10am–6pm, Friday 10am–9pm). As Andrew Lambirth wrote in his review of the exhibition in the Spectator (11 September 2010, pp. 51-52), “the paintings look immensely impressive and repay time spent in their company”.

A study day at the National Gallery on 2 October 2010 aired various of the many themes associated with these paintings:

among others, the architecture of the Ospedale degli Innocenti in Florence; Mantegna’s frescoes in Padua (destroyed in World War II); Cayley Robinson and contemporary mysticism; Cayley Robinson’s murals at the former Heanor Grammar School in Derbyshire (now apparently the Mundy Street campus of Derby College); fundraising for hospitals in Victorian and Edwardian London, and the business activities in Rhodesia of Cayley Robinson’s patron Edmund Davis (right, enjoying the fruits of his labours).

One interesting point that emerged in discussion was the question whether the settings of the orphanage (in the pair of Orphans) and the hospital (in the pair of The Doctor) are not presented objectively but as seen though the eyes of the people within them—the orphans, veterans, and waiting patients. As shown in another painting by Cayley Robinson lent to the exhibition, people “lost in thought” form one of his favourite subjects: for an artist so focused on thinking and thought processes, this seems an attractive interpretation. It puts the viewer into a state of aporia between solipsism and realism such as is found in works with unreliable narrators: at one extreme the described world could simply reflect the state of mind of the characters, while at the other they are mere staffage created to play a pre-ordained part within that world. 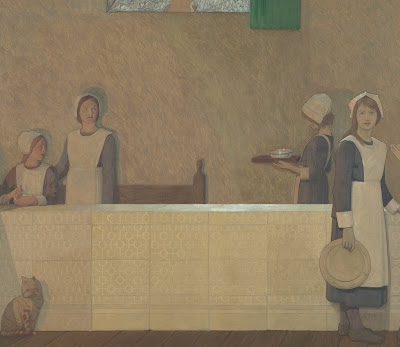 From the former point of view, the vacuity and routine of the orphans’ lives are their perception, not an objective criticism by Cayley Robinson of institutions such as The Middlesex Hospital, while the grandeur and antiquity of the veterans’ hospital represents a contrast in the soldiers’ minds between their present accommodation and the make-do-and-mend of trenches roofed with corrugated iron.

For those who wish to pursue this conundrum further, the paintings will return to the Wellcome Library and go back on public display there at the beginning of November, if not earlier.