By Phoebe Harkins | Events and Visits 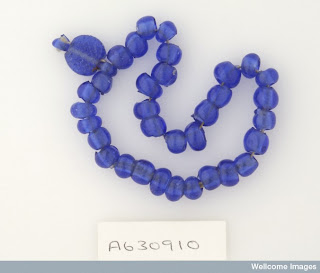 The Wellcome Library’s Ross MacFarlane will be giving a talk at the Cuming Museum, London, on Saturday 16th October, titled ‘London’s Lost Collector: Searching for Edward Lovett and His Magical Collection’.

Lovett was a folklore collector in the early 20th century, with a particular interest in lucky charms and healing objects. A great deal of these objects were collected by Henry Wellcome and his staff for Wellcome’s collections: the Wellcome Library still holds detailed correspondence on their acquisition and some of them – such as the amuletic necklace shown above – are on show in Wellcome Collection’s ‘Medicine Man’ exhibition.

The talk is part of a series of events to tie in with the new exhibition on the artist and occultist Austin Osman Spare at the Cuming Museum (which also holds a large array of Lovett-collected objects).

More details on the exhibition and the series of talks are available from the Cuming Museum’s website.