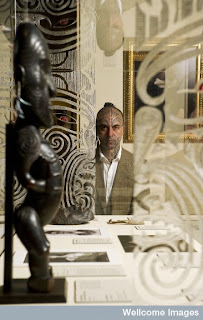 The Wellcome Library’s photographer, Dave Sayer, has won a Gold award at the Institute of Medical Illustrators (IMI) annual awards, for his photograph of George Nuku at Wellcome Collection’s Skin exhibition.

Dave captured George, an artist, with the Maori display case he created for the exhibition. The case is a representation of Rarohenga, the underworld and realm of the spirits in Māori mythology. Rarohenga is home to Niwareka, who, with her husband Mataora, is depicted on the sides of the case.

With this photograph, Dave has illustrated the creative process involved in the design and sculpting of one of Skin’s many exhibits. The portrait relates George, with his work and his ancestral facial tattoos, to the display of Maori imagery in the exhibition. The judges at IMI gave Dave a Gold award in recognition of his exceptional use of technique, understanding and interpretation of George and his work. 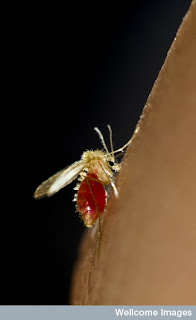 Another of our photographers, Ben Gilbert, was presented with a Bronze award for his striking photograph of a 19th century wax embryo, in recognition of his excellent application of technique. The wax model was created under the direction of anatomist Alexander Ecker and used as a teaching aid around 1850. Dave was also given a Bronze award for this chilling photograph of an engorged female sand fly, the vector for visceral leishmaniasis – a potentially fatal tropical disease.

The range of these images show the breadth of the work undertaken by the Wellcome Library’s photographers. Congratulations to them both.