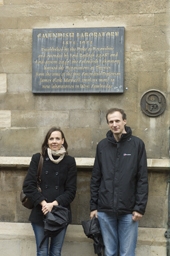 The preparation and photography of the Francis Crick archive have provided the digitisation team with a rare and intimate glimpse into the life and thoughts of the Nobel-prize winning scientist. What prevails is a pragmatist, a prolific correspondent, a man of passion for science, of wit and humour and of cutting sarcasm. This thought provoking archive inspired a visit to Cambridge to take a closer look at lasting remains of Crick and Watson’s time there.

Crick moved to Cambridge in 1947 after his stint as a scientist at the British Admiralty.With practically no experience of biology, chemistry or crystallography, he worked at the Strangeways Research Laboratory on the physical properties of cytoplasm in cultured fibroblast cells. He later worked on the x-ray analysis of haemoglobin with first Max Perutz and later Lawrence Bragg at the nearby Cavendish Laboratory under the Medical Research Council.

Our second port of call was Caius College where in 1950 Crick became a PhD research student working on the general theory of X-ray diffraction by a helix. Sadly we were unable to access the dining hall where the commemorative stained glass window (pictured) dedicated to Crick is situated. Efforts to view the window from outside were futile but we were reassured by Crick’s typically modest response to the commemoration in a letter dated February 27 1991 to Dr A Edwards of the College (File ref: PP/CRI/L/1/4/4)

I was surprised, flattered and delighted to learn that you are considering putting up a window in Hall to commemorate me and the double helix. The main difficulty I see is that Jim Watson was also involved. In fact he was the senior author. I feel that it is essential that he should give his blessing to the project … There is one very minor point about the design. The double helix is right-handed. A stained glass window will look right-handed from one side and left-handed from the other. However I doubt if this will matter much since the details of the window would probably not be very visible from outside! (Feb 27 1991)

We did not visit Churchill College on the outskirts of Cambridge since there are no mementoes of note relating to Crick, perhaps due to his resignation just a year after his nomination as a Fellow. Crick, an atheist, had agreed to become a Fellow on the condition that no chapel would be placed there but the College went against this clause and placed a chapel there regardless of the views of Crick and other dissenters. It was not the only time he caused a stir at the college. In a letter dated June 14 2000, Crick recalls another point of contention:

one objection was that some of the women guests might be unsuitable. I pointed out that all clubs expected members not to bring in unsuitable guests, and that several of my uncles would be out of place at High Table. Partly as a result of my arguments it was agreed that women should be allowed to dine. It seemed to me a very C. P. Snow sort of situation

Crick met James Watson in 1951. He had come from America in search of a like-minded brain to help him solve the mystery of DNA, and hopefully the secret of life. It was an instant meeting of minds. Though self-confessed ‘amateurs’, Crick admitted it was “a great help being two of us” and that their discovery of the double-helix was “not a typical bit of science” (extract from Crick’s notes on the DNA revolution given to the San Bernardino County Medical Society’s General Membership Meeting, 1 April 1986, file Ref: PP/CRI/K/5/9)

Though ebullient and immodest to his colleagues, Crick was uncomfortable with the attention he received for his achievements and as we saw above, he was always anxious to include Watson in any praise received. He said of the 1993 40th anniversary of the double helix discovery “Why anyone should want to celebrate the 40th anniversary of anything is beyond me but I assume they feared that by the 50th anniversary most of those involved might be dead’”. Though he survived the 50th anniversary in 2003, sadly he died of colon cancer the following year. Following his death, a sculpture by the American sculptor Charles Jencks commemorating Crick and Watson’s achievements was donated by Watson to Clare College Gardens in 2005 where Watson was a former alumnus. 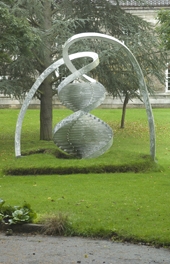 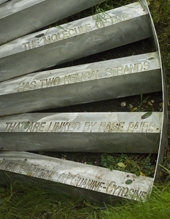 The wording on the sculpture explains their discovery simply:

• “These strands unravel during cell reproduction. Genes are encoded in the sequence of bases.”

• “The double helix model was supported by the work of Rosalind Franklin and Maurice Wilkins.”

• “The structure of DNA was discovered in 1953 by Francis Crick and James Watson while Watson lived here at Clare.”

• “The molecule of DNA has two helical strands that are linked by base pairs Adenine – Thymine or Guanine – Cytosine.”

So consumed was Crick with his work on the helix structure of DNA that he had a model of it displayed outside his house on 19-20 Portugal Place also referred to as ‘The Golden Helix’ where he lived with his wife Odile from Autumn 1952. 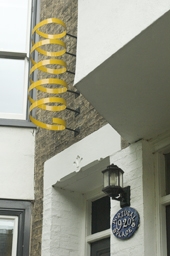 The helix is not double but single here, a simple symbol of Crick’s momentous discovery the previous year. It was here on 18th October 1962 that Cambridge police were allegedly called to a disturbance involving exploding firecrackers being thrown down to the street. The owners had thrown an extravagant party to celebrate being awarded the Nobel Prize for Physiology or Medicine. (p. 1-2, Francis Crick, Hunter of Life’s Secrets by Robert Olby, Cold Spring Harbour Press, 2009). Crick’s partying spirit made him stand out as Matt Ridley points out in his book (Francis Crick, Discoverer of the Genetic Code, 2006): “Crick stands out among the great scientists of history precisely because he was not eccentric, silent, shy or obsessive. He was gregarious and an extrovert.” Allegedly he was a “dandyish feature on the Cambridge scene” and one of the few academics to have a “subscription to Vogue” (p.63, M. Ridley 2006).

Back in February 28 1953, their discovery was first announced by Crick and Watson in the now famous RAF bar of The Eagle pub, a location which just had to be visited. Within a 2-minute walk from the old Cavendish laboratory the pub’s many features include a plaque commemorating the announcement as well as a quote by Watson painted on the adjacent door (table 12 for those whom might wish to visit). 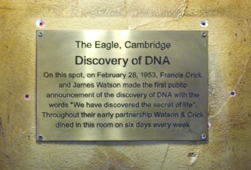 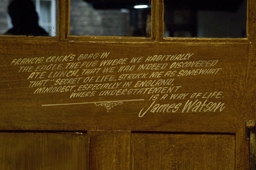 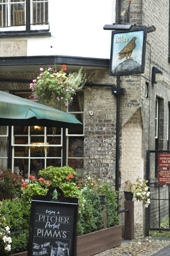 Here, beneath the graffiti covered ceiling (created by the cigarette lighters of RAF and American airmen during World War 2) the two scientists regularly lunched 6 days a week to fuel their work.

It is tempting to think they were furiously at work all day and every day but, it seems, life was a little more relaxed: in a speech entitled ‘The Way We Were’ given in 1993 at a Cold Spring Harbour event, Crick talks also about the slower pace of life in the late 50’s and how on occasions “if it was a nice afternoon”, he and Watson would “go punting up the river” …”time has shown that none of the great scientists in our time were punters”(File ref: PP/CRI/K/12/2) 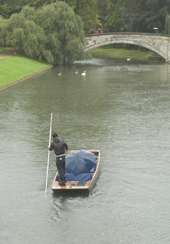 And thus concluded our tour of Cambridge …