The Wellcome Trust Centre for the History of Medicine at UCL has for many years been associated with a noted series of seminars held under the title of “Wellcome Witnesses to Twentieth Century Medicine”. At each seminar, significant figures in twentieth-century medicine discuss specific discoveries or events in recent medical history. The topics covered are some of the most interesting and sometimes contentious subjects in 20th century medicine and tackle issues that will be of wide interest to the general public as well as medical historians. Titles of seminars, to name but a few, include; Maternal Care; Leukaemia; Genetic testing; Cystic Fibrosis; Innovation in Pain Management; Environmental Toxicology; Superbugs and Superdrugs: A History of MRSA; and the latest volume, number 40, is titled The Medicalization of Cannabis. The transcripts for the large majority of seminars were published, and all 40 published volumes in the series are freely available to read and download from the website of The Wellcome Trust Centre for the History of Medicine at UCL (copies of all the published volumes are also held by the Wellcome Library). 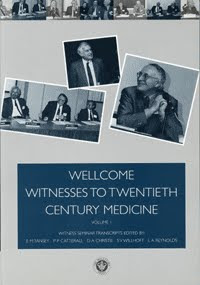 Some of the foremost scientists and healthcare professionals of their generation in their specific fields have been involved in the witness seminars and these newly released papers should form a valuable contribution to the documentary legacy of those individuals as well as the history of a particular subject.

Irvine Loudon, medical historian, has described the seminars as “oral history at its best”. Adding that, “regardless of your own areas of interest, all the volumes make compulsive reading because the participants tended to ‘let their hair down’ and talk more freely than they would have at a scientific meeting. They discuss openly the hidden realities of the evolution of medical practice and medical research. But the witness seminars are more than just fun to read. They are, primarily, important historical records.”

Whilst the seminars did not purport to be the final word on a particular topic or involve every notable contributor to the subject, they were designed to be a significant contribution to the subject history and involve a strong cross-section of the key individuals. This means that the published documents are wonderful historical commentaries written in a style that makes them very accessible to a general reader as well as a subject specialist. The extensive use of detailed footnotes and appendices in these volumes also meant that supporting material and additional material not aired at the seminars themselves could also be included in these publications.

Highlights amongst the archival material include: 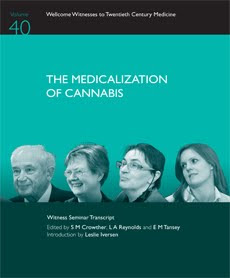 · The papers and material associated with the seminars that were unpublished, and those seminars where resulting material was published but not in the witness seminar series.

· Early transcript drafts together with the correspondence with each individual contributor to the seminar debates. This correspondence involves the discussions surrounding corrections of the transcripts and often contains details of disagreements with other contributors before a final version of the transcript was agreed upon. On many occasions the letters contain reminiscences about an individuals’ involvement with the subject matter and suggestions regarding other important individuals. Not all of this material appeared in the published volumes.

· Supporting and related documents donated from the personal records of contributors. The tendency to donate supporting material to the witness seminar archives became more prevalent with later seminars and includes items such as internal organisational reports, newsletters of related interest groups and personal letters received.

· Details of the organisation of the seminars including discussions regarding the topic, the key participants, who should be the chair or an adviser and problems and issues regarding a particular volume.