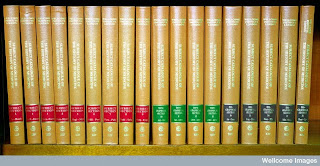 Our monthly cataloguing bulletin for October is short: not because of a lack of activity, but because the vast majority of the material newly released to the public falls into two major collections, both already described on the blog.

Wellcome Witness Seminars: as noted last month, the catalogue of material documenting the Wellcome Witness Seminars held over the past twenty years has been subject to a major expansion: recent seminars were added to the catalogue completely recasting the arrangment of the catalogue and doubling its size. This new material includes original audio tapes of the seminars (in some cases, master plus copy), photographs of witnesses and other participants, correspondence, and programmes and lists of participants. The new catalogue was made visible in early October, and described here. It can be browsed in the archives catalogue using the reference GC/253.

Alice Stewart: as noted in another recent blog posting, this month saw the completion of work on the papers of Alice Stewart (née Naish). These chiefly relate to her career in epidemiology, especially on effects of low-level radiation. She worked with John Ryle in the Department of Social Medicine at Oxford and was famously involved in a controversy with Sir Richard Doll over her childhood cancer study conclusions. The bulk of the papers relate to the later phases of her career from the 1970s onwards, although there is some material relating to her earlier activities: there is professional correspondence from the 1960s until the time of her death, copious records of her research activities, and numerous files relating to her involvement in lawsuits as an expert witness on vibration sydrome and on the effects of low-dose radiation. Her extensive travels to speak in both academic and other venues, particularly from the 1970s, are well-documented, as is her support for organisations and activist groups concerned about radiation and the environment, among these the Women’s Protest at Greenham Common. Finally, there is some personal and family material, including material on her mother (an early woman doctor), and letters from the poet and critic William Empson with whom she had a relationship spanning several decades.

Finally, a new sources guide was added to the archives section of the website, detailing sources relating to Smoking and Tobacco, and a catalogue record created for this so that searchers in the database could be directed to this listing.