Epic of the Persian Kings: The Art of Ferdowsi’s Shahnameh 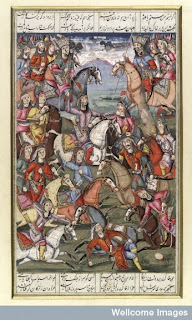 Material from the Wellcome Libary is currently on display at the Fitzwilliam Museum in Cambridge, as part of a landmark exhibition.

Epic of the Persian Kings: The Art of Ferdowsi’s Shahnameh explores the monumental artistic legacy of one of the world’s greatest literary epics: the 1000 year-old Persian ‘Book of Kings’, or Shahnameh.

Completed by the poet Ferdowsi in 1010 AD, this vast narrative poem (twice as long as the Iliad and Odyssey put together) charts the history of the Iranian world from its creation to the fall of the Persian Empire in the seventh century. It is an icon of Persian culture and has inspired some of the world’s most exquisite manuscripts.

To mark the passing of a millennium since the completion of the Shahnameh, the exhibition brings together nearly one hundred paintings from lavishly illustrated manuscripts spanning 800 years, amounting to the most comprehensive exhibition of Shahnameh art ever mounted in this country.

From its collection of Persian manuscripts, the Wellcome Library has loaned to the exhibition a nineteenth century folio depicting the second battle of Key Khosrow and Afrasiyab:

“Key Khosrow has crossed the Jeihun (Oxus) river pursuing Afrasiyab to his fortress of Gang Dezh. Afrasiyab comes out to meet him and battle is joined. Seeing the great loss of life, Key Khosrow goes apart and prays for aid, and a great wind rises to blow in the face of his Turanian adversaries. The army of Iran has the best of the battle and, with news of the approach of Rostam, Afrasiyab retreats to Gang Dezh.

The great wind is indicated on the folio with black clouds in the distance. The distant landscape is treated with aerial perspective, and colour is applied with a view to creating an effect of a European watercolour. Volume is indicated by variations of tone and by hatching, and shadows are cast. White highlights are applied – a feature more characteristic of oil painting than of watercolour. Many faces have suffered a damage: this is from a tendency of white pigment to flake, rather than from a deliberate attack, and it is observable on white horses also. The surviving faces have a passionate – albeit uniform – expression, with eyes rolled, brows contracted and eye sockets carefully shaded. Both commanders wear tall archaising crowns favoured by Fath `Ali Shah (reg. 1797 – 1834); these and other accoutrements and horse trappings are shown as liberally decorated with rubies and pearls”. [1]

[1] Brend B, Melville C. Epic of the Persian Kings. The Art of Ferdowsi’s Shahnameh. IB Tauris 2010