By Lesley Hall | Events and Visits 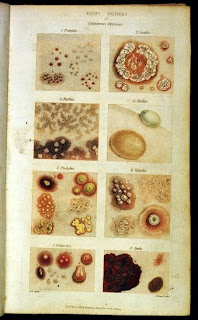 Last week I attended as invited commentator a fascinating and thought-provoking conference, ‘Scratching the Surface: the history of skin, its diseases, and their treatment’, held at the University of Birmingham Medical School under the auspices of the History of Medicine Unit at Birmingham and Trent University (Ontario), with support from the Wellcome Trust and the Society for the Social History of Medicine. Many of the speakers were familiar faces from their researches in the Wellcome Library.

With twenty papers packed into the course of two days, this conference was both dense and wide-ranging. The periods and places under discussion ranged from eighteenth-century London, Italy and Quebec to 1980s San Francisco, via Mexico City in the 1790s, the nineteenth century Maghreb under French colonialism, Hong Kong and its New Territories under British rule before the Second World War, and mid-twentieth century Uganda. The conference was kicked off to an excellent start by Philip Wilson’s keynote, ‘Reading the Skin, Discerning the Landscape: Geohistorical Depictions of the Human Surface’.

Among the rich spread of topics discussed were the apparently new disease of pellagra in eighteenth century Italy (already associated with maize-eating, in the form of polenta, at that early date); Admiral Francis Beaufort (of wind-scale fame)’s skin disease and its diagnoses both contemporary and more recent; outbreaks of skin conditions believed to be specific to a particular area (St Paul’s Bay Disease in Quebec, ‘Radesygge’ in Norway, the lesions observed among the indigenous population of the Mahgreb); Percival Pott and his colleagues treating wounds at Barts in the eighteenth century; scrotal cancer in chimney-sweeps; vaccination, tattooing and ‘dermographia’; light therapy for lupus in the early twentieth century.

A theme that pervaded the conference was the important of visual depictions of skin diseases and the quest for accurate reproduction of various dermatological phenomena, through water-colour paintings, wax modelling and the preservation of specimens, and the important role these played both in teaching medical students and in health education. Another theme was the common perception that manifestations on the skin signified deeper problems within the bodily system. While many papers dealt with this question of what was false within appearing on the surface, others dealt with the penetration of the skin by outside forces, whether this was the wound treated by the surgeon, the surgeon’s own penetrating knife or scalpel wounding to heal, the soot ingrained in the skin of climbing boys, the lancet of the vaccinator, the needles of the tattooist, or the entry into the system of woolsorters of the anthrax bacillus.

The wider cultural concerns which, as it were, were perceived as writing themselves on the skin or explored through dermatological issues were strongly represented. To take just one example, the ‘Itch’ in early modern London was not merely associated generally with the more degraded social elements, it was particularly associated with the Scots who, following the Act of Union, were seen as that era’s flood of undesirable immigrants to the metropolis.

The presence of the particularly stigmatised ailments of leprosy and syphilis was prevalent: one redolent of Biblical horror and the other of God’s punishment for immorality. The attitudes they created towards sores and lesions on the skin seem to have become intricately imbricated in attitudes towards other diseases which manifested similarly.

As may be imagined, providing a few summary concluding remarks was a far from easy task with so many excellent papers and such a variety of topics, but some attempt was made to draw out common themes and resonances, including the need for caution in, so to speak, deciphering the messages written on the skin and not turning these into simplistic dramatic or moralistic narratives.

It is anticipated that a publication will ensue from this stimulating event.