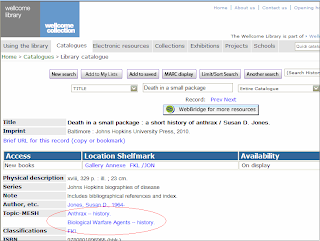 Today the National Library of Medicine (NLM) in the United States celebrates the 50th anniversary of its controlled vocabulary called Medical Subject Headings (MeSH®). MeSH is used in the Wellcome Library catalogues for subject access.

Subject access to the medical literature was recognized as essential by John Shaw Billings, a field surgeon in the US Civil War who took charge of the first collection of books at the Library of the Office of the Surgeon General (as the NLM was then). Billings produced, in the 1870s, the first Index-Catalogue and a current awareness publication, both indexed by subject.

The volume of medical literature published grew at an exponential rate from the latter half of the 19th century. The need for efficient retrieval of relevant information gained new urgency with the onset of World War II. A survey of the Army Medical Library (the next incarnation of the NLM) in 1943 by professional librarians highlighted problems, and out of the recommendations emerged reformulated principles for selection of subject headings. Discussions at a symposium on subject headings in 1947 led to the publication in 1954 of the first official list of controlled subject headings, the Subject Headings Authority List. Two years later, US Congress gave the Library its statutory authority as the NLM.

Improvements in technology led in 1960 to reinvention of the Index Medicus, with mechanized production which was much more efficient, and with the first edition of MeSH, designed for application (and here was novelty) to both periodical indexing and subject cataloguing of books.

With computerization, development of an automated retrieval system was underway, and in 1964 the Medical Literature Analysis and Retrieval System (MEDLARS) was born, complete with a MeSH database consisting of Tree Structures (a hierarchy of terms) that make it such a great aid to automated retrieval. MEDLARS Online, or MEDLINE, the database of citations and abstracts we know and love today, was offered in 1971.

Medicine has many specialized fields, each with its own terminology, and new discoveries have necessitated continual revisions of MeSH, expanding the number of headings to over 26,000 in the 2011 edition. MeSH’s ubiquity as a means of bibliographic control of the medical literature is a tribute to over half a century of hard work and the foresight of our colleagues in the NLM.