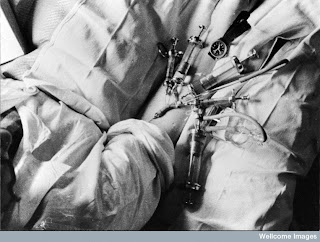 “Who are the hardest, bravest men and women in the history of science?” asks Ian Sample on The Guardian‘s Science Blog.

The resulting list – and slideshow – make for interesting reading and the nominated scientists feature a number of figures whose papers we now hold in the Wellcome Library.

These are Sir Henry Head (“Operated on his own arm to investigate how sensations change when peripheral nerves are cut and left to regenerate”), Elsie Widdowson (“Biochemist who studied at Imperial College London. Widdowson and her colleague, Robert McCance, endured minimal diets for long periods to study the effect of calorie restriction on health”), Cicely Williams (“…specialised in children’s diseases and developed life-saving high-protein diets while working in Africa. During the second world war, Williams was captured after the fall of Malaya and was held in two different Japanese prison camps, where she continued to treat patients despite coming close to death herself”) and Alice Stewart (“took on the British and American governments with research that showed that the adverse effects of low-level radiation were more serious than either officially admitted”).

It’s good to see these scientists being brought to a wider audience through Sample’s article and intriguing too to see the further suggestions given in the comments thread which follow it. As for our own suggestions, if self-experimentation is seen as a sign of bravery, then those featured in the 2007 BBC series Medical Mavericks are fine candidates for a place on the list.

Image: Photograph of the injection into Dr Elsie Widdowson’s arm of iron, calcium and magnesium (GC/97/B.2)