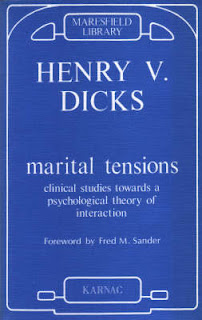 The papers of the influential psychiatrist Henry Dicks (1900-1977) are now available in the Wellcome Library (Ref. PP/HVD). Having been born in Estonia to an English father and German mother, Dicks spoke English, Russian, German and French. This linguistic flexibility bestowed upon him the facility to examine, compare and comment upon different European cultures. He brought his professional psychiatric training to bear on an analysis of what underlay the great tides of human affairs that swept across the continent during his lifetime, writing in 1972 that “…currents of group and mass action remain enigmatic if we exclude from their study the influence of the strivings and roles of individual actors – leaders and led”. [1]

Dicks is well known for his work during World War II when he served in the British army as a psychiatrist. He interviewed and conducted psychological evaluation of German prisoners of war and assessed the prevalence of national socialist ideology. He made reports on the state of morale of German forces, recommended how to conduct psychological warfare and target propaganda for maximum effect and, for a period in 1941, was physician in charge of Rudolf Hess. During the latter stages of the War, and in the immediate post-War period, Dicks provided similar expert opinion to the Supreme Headquarters Allied Expeditionary Force and the Allied Control Commission for Germany, including on the ‘de-Nazification’ of German army personnel. All this activity is represented in his papers, which include many of the official reports and memoranda that he produced and his notes on interviews with individual prisoners of war. Having collaborated with the sociologist Edward Shils during this period, Dicks went on to work with him on a RAND Corporation-financed study of Soviet soldiers who fetched up in the West.

Dicks was to draw on this first-hand experience in his repeated return to questions about authoritarian psychology and collective psychopathology. His first work on this topic, a “psychopathological study of European culture patterns”, written in the late 1940s, remained unpublished (a draft is contained in the collection: ref. PP/HVD/B/3/2). During the next 3 decades, however, he published and lectured widely on topics such as ‘the Bolshevik personality’ and ‘the Nazi character’. His papers bear witness to the interdisciplinary nature of his preoccupations which ranged across the behavioural sciences, sociology, social philosophy, and history. Between 1967 and 1968 he conducted face-to-face interviews with those in prison in Germany for war crimes and in 1972 published a monograph on Licensed Mass Murder: A Socio-psychological Study of Some SS Killers, which is still much-quoted today.

In addition to the attention he gave these interests, the bulk of Dicks’s career was spent in clinical practice, teaching and research at the Tavistock Clinic in London where, apart from the interruption of the war years and a brief spell in Leeds, he worked from the early 1930s until the mid 1960s. Only a few papers relating to his pre-War career survive, but the collection does include material reflecting his wide-ranging professional interests from the 1940s onwards, including his work in the field of marital therapy. During the 1950s and 1960s Dicks and his colleagues at the Tavistock pioneered new and influential approaches to the couple as a unit of therapy, extending the theory of object relations, as developed by Klein, Fairbairn and others, to the analysis of marital dysfunction.

The 14 boxes of Dicks’s papers now available in the Library bear testament to the way in which he moved his critical focus back and forth between the macro-social currents of European society and the micro-social unit of the modern marriage. We hope that, as a result, those working in many and varied fields of study will visit the Library to consult the collection.