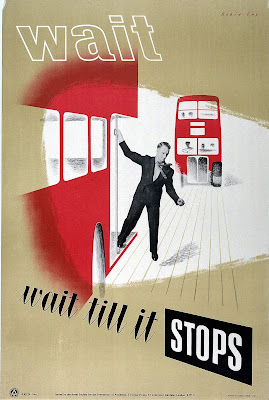 Probably everybody reading this has at some time sat in a chair designed by Robin Day, the designer who died on 9 November 2010 aged 95. His stackable plastic chairs, and their derivatives, are ubiquitous in British schools, hospitals and office meeting rooms.

Left, poster by Robin Day for the Royal Society for the Prevention of Accidents, ca. 1954. Wellcome Library no. 32584i

However, he designed more than chairs. During World War II he designed posters for the Ministry of Information, and in 1951 signage for the Festival of Britain. The Wellcome Library holds posters which he designed for the Royal Society for the Prevention of Accidents.

The poster above, possibly from 1954, shows the danger of alighting from a bus of the open-platform type which is scheduled to be reintroduced in London this time next year. Three different lettering-types are used to describe the three activities involved: waiting (leaning backwards), the bus trundling onwards (cursive), and the final emphatic stop (sanserif caps bold in white on black, and boxed for good measure). The man alighting looks like a self-portrait of Day himself. 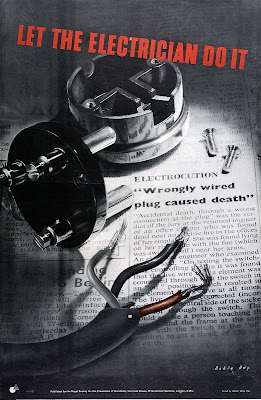 Right, poster by Robin Day for the Royal Society for the Prevention of Accidents, ca. 1954. Wellcome Library no. 32585i

This film noir-type poster (right) about the rewiring of an electric plug shows an early bid in the interests of safety to reserve more work for electricians and less for amateurs.

As is the way with posters, both preserve fragments of social history within their overt message – such as the vanished three-round-pinned plug (still used in India).

See further Fiona MacCarthy’s obituary of Robin Day in the Guardian, 17 November 2010, and Charlotte Higgins’s account of a visit to him in the same paper, 18 November 2010.