Robert Gooch: “A name, I trust, that will not perish in the dust” 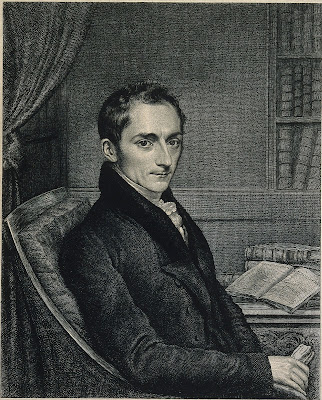 Some 9,000 of the Wellcome Library’s portrait-prints and -drawings are catalogued in the Wellcome Library catalogue, but most of the records are very brief: they omit much of the information found in Dr Renate Burgess’s printed Catalogue of portraits (1973), mainly but not entirely through lack of staff available to input the data. A subsidiary reason is the relative simplicity of our application of the computer cataloguing format, which, unlike the printed catalogue, currently has no way of allowing biographical data about a particular sitter to be input only once for each sitter. Annoyingly for the online user, one can therefore often find much useful information in the printed catalogue that is not in the computer catalogue.

That situation came to the fore while I was looking at the entry in the Wellcome Library online catalogue for John Linnell’s engraved portrait (above) of Robert Gooch (1784-1830), a very busy and much admired general practitioner and obstetrician in Georgian London, with special knowledge of diseases of women. There was one, brief, record for his portrait, but when I opened the solander box that contained the print, I found two impressions of the Gooch print, one of an earlier state than the other. The difference is most obviously shown in the lettering.

The earlier one, dated 30 March 1831, had Linnell’s name etched in his handwriting, whereas the later one, dated 20 May 1831, had lettering in imitation of a formal font. (Gooch had died on 16 February 1830, having sat to Linnell in 1827.) The earlier version looks like a private reminder of the man who had delivered most of Linnell’s nine children, while the latter is more of a public memorial. In fact the existence of the two different states had been mentioned in the printed catalogue, but the situation was evidently too complicated to render in the computer when the initial mass data-input was carried out. For the portrait of Gooch the lacuna has now been filled and there are now two Wellcome Library catalogue records, one for the earlier state and one for the later state.

The reason for checking the originals was the offer for sale at Christie’s South Kensington on 17 November 2010 (lot 191) of Linnell’s original painting (1827), of which, it emerges, the first state of the engraving is a very faithful rendering. In the second state of the engraving, apart from the changes in the style and content of the lettering, a correction is made in the fictitious edition of Harvey’s De motu cordis which is shown on the table open with an anatomical frontispiece: Harvey’s Latin name is given as “Gullelmo Harvey” in the painting and in the first state of the etching, which is corrected to “Gulielmo Harvey” (“by William Harvey”) in the second state. Sadly, no hotlink to Christie’s online catalogue record for the painting is possible, as less than a week after the sale it has already disappeared from Christie’s website: it is necessary to consult the hard-copy catalogue.

In all three versions, Linnell exposes Gooch’s cadaverous appearance, caused by the effect of overwork on an already sick man: Gooch was battling with pulmonary tuberculosis and a severe stomach illness, not much relieved by his being appointed librarian to King George IV in 1826. After a serious lung haemorrhage in the same year Gooch compared himself to the “anatomie vivante” or living skeleton Claude Ambroise Seurat. [1]

According to Hilary Marland’s entry on Gooch in the Oxford Dictionary of national biography, while “on a tour of the Lake District in 1811 Gooch met the poet Robert Southey, who remained a lifelong friend”. Seated with his Harvey and other old books shown in the bookcase behind, Gooch could perhaps have felt the same sentiments as were expressed by Southey in his famous poem written in Keswick in 1818.

My days among the Dead are passed;

Around me I behold,

Where’er these casual eyes are cast,

The mighty minds of old;

My never-failing friends are they,

With whom I cónverse day by day.

With them I take delight in weal,
And seek relief in woe;
And, while I understand and feel
How much to them I owe,
My cheeks have often been bedewed
With tears of thoughtful gratitude.

My thoughts are with the Dead; with them
I live in long-past years,
Their virtues love, their faults condemn,
Partake their hopes and fears,
And from their lessons seek and find
Instruction with an humble mind.

My hopes are with the Dead; anon
My place with them will be,
And I with them shall travel on
Through all futurity;
Yet leaving here a name, I trust,
That will not perish in the dust.

(If only we could have the same confidence in the imperishability of online auction catalogues!)