For fourteen years I have not had a day’s real health; I have wakened sick and gone to bed weary; and I have done my work unflinchingly. I have written in bed, and written out of it, written in hemorrhages [sic], written in sickness, written torn by coughing, written when my head swam for weakness; and for so long, it seems to me I have won my wager and recovered my glove [1]

The quote comes from a letter written in September 1893 by the Scottish author Robert Louis Stevenson, born on this day 160 years ago. It summarises the dedication Stevenson had to his life as a writer, which he maintained despite his long-standing ill-health. And whilst we would not aim to reduce Stevenson’s career to one purely shaped by illness, the anniversary of his birth affords us an opportunity to mention a number of instances – represented in the collections of the Wellcome Library – where medicine is reflected in his work.

Take The Strange Case of Dr Jekyll and Mr Hyde: the first commercial success of Stevenson’s career and arguably his most famous work. Conceived by Stevenson as tale in the Gothic tradition, the story is now interpreted as a discussion on personality and primitivism, a work influenced by the evolutionary theories of Darwin and prefiguring the work of Freud on the unconscious. But consider too the nature of the transformative agent Jekyll takes – this has been interpreted as an underlying comment on nineteenth century attitudes to drugs and cocaine in particular. Others have seen the spatial arrangement of Jekyll’s home as being influenced by the eighteenth century surgeon John Hunter and his property in London’s Leicester Square, which served as both his residence and teaching museum. 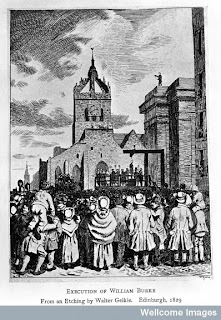 A clearer medical influence comes from Stevenson’s birthplace. Growing up in mid-nineteenth century Edinburgh, the murders carried out by William Burke and William Hare – committed in order to procure bodies for the anatomy lecturer Dr Robert Knox – were still very recent to Stevenson and formed the basis for his early story The Body-Snatcher.

Stevenson’s health – contemporary opinion was that he suffered from a tubercular complaint – necessitated a great deal of travel to seek warmer climates for his health. It’s ultimately this need which led to Stevenson’s life of almost constant upheaval and how he and his family eventually settled in Samoa. But as our quote above indicates – and his astonishingly wide-ranging output shows – Stevenson was not a writer whose illness restricted his creative sensibilities.

Image: Execution of William Burke, from The Sack-’em-up-Men by J.M. Ball