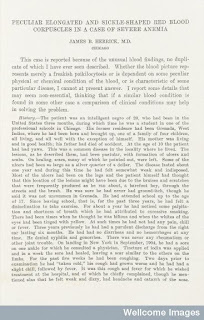 Today marks the centenary of the publication of this paper, ‘Peculiar elongated and sickle-shaped red blood corpuscles in a case of severe anemia’ in Archives of internal medicine. Written by Dr James B Herrick, the paper reported the “sickle shaped” cells in the blood of Walter Clement Noel, a student from Grenada who was admitted to Chicago Presbyterian Hospital in December 1904 suffering from anemia (the observation had been made by Herrick’s intern Ernest Edward Irons). Although some elements of the disease had been recognised earlier, this paper was the first step to our modern understandings of sickle cell anemia. 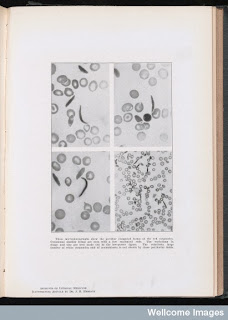 Aside from this article, the Wellcome Library holds a range of material relating to sickle cell anemia and sickle cell disease, in both our Medicine & Society and History of Medicine sections and also in our Moving Image and Sound Collection.

We also hold the papers of the haematologist and nutrition researchers Dr Henry Foy and Dr Athena Kondi (PP/FAK), who from the 1940s to 1970s, carried out surveys of sickle cell anemia in Greece, Mozambique, Kenya, Sudan, India and Mauritius. Some of Foy and Kondi’s anemia research was funded by the Wellcome Trust: more details on the Trust’s recent funding into sickle cell anemia can be found on this post on the Wellcome Trust Blog.