The father of serology – Arthur Mourant 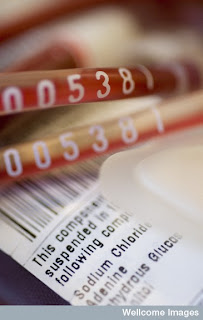 Following on from Francis Crick, preparation work for digitisation continues through the enormous quantity of archival material related to the theme of Modern Genetics and its Foundations here at the Wellcome Library, with the personal papers of Jersey born Arthur Mourant (April 11, 1904 – August 29, 1994).

A man of many talents, it seems, from his initial interest in geology, archaeology and anthropology to his area of expertise later in life – haematology. He was a recipient of many awards and honours during his life-time, but most importantly for his blood transfusion work: in 1945 he discovered a serum with antibody to the e factor; his subsequent development of the Antiglobulin_test which ensured the compatibility of blood in transfusion, paved the way to the modern day Blood Transfusion Service. The effect this test had on the detection of blood-borne diseases was, needless to say, ground-breaking.

An ‘exceedingly promising’ science student at school [File ref: PP/AEM/A.57 1920], the young Mourant went on to Oxford graduating with first class honours in chemistry and philosophy in 1926. He digressed to follow his interest in geology in the following years and proved to be an accomplished draughtsman according to a number of geological and botanical sketches within the collection [File refs: PP/AEM/A.86, PP/AEM/A.91, PP/AEM/A.92 all dating to 1926]. Despite the difficult post-war economic slump, Mourant managed to secure a position at The Geological Survey in 1929: File: PP/AEM/B.1 contains his Official pass with photo for Dept of Scientific and Industrial Research and a pass ‘To Walk Upon The Line’ of London Midland and Scottish Railway Co. Examples of his field work sheets are held within File ref: PP/AEM/B.2.

However, unsatisfied by the priorities of the Survey, Mourant resigned in 1931 following the ending of his probation according to File ref: PP/AEM/B.6: on the basis that he was “not likely to prove an efficient field geologist of the type that we require on this staff”. The subsequent depression years put paid to this particular career path it seems: File PP/AEM/A.112 contains a handwritten list of all the posts (largely for chemistry master in numerous colleges and schools) that Mourant applied for between 1931-7. He was forced to resort to taking a course in medical chemistry and returned to his childhood home of Jersey, where he set up a chemical pathology laboratory (1933-38) which later became the States of Jersey Pathology Laboratory.

Restless again, Mourant returned to his medical studies in 1939 at St. Bartholomew’s Medical College, in London just before the German occupation of Jersey in 1940. As with all archives, there are some revealing insights into the life of their creator. During this period of his life when he was isolated from his family, the numerous letters that Mourant receives from his mother reveal a fascinating, if personal insight into what life was like in Jersey during the German occupation – she writes:

“I bought a jar of honey yesterday, & this week we have marmite … we have plenty of food (& nice things too). This week we have had a nice lot of chocolate & it is a treat to have bacon…”

Aside from these culinary benefits, more significantly, she reveals:

[File ref: PP/AEM/A.189]. This vast underground hospital was built in 1944 to protect the German troops from the expected allied invasion that never occurred. It has since been carefully restored as a museum of the German occupation in Jersey. A regular stream of parcel exchanges it seems kept the family spirits up during this period – while Mourant sent his mother ‘nylons’ from America, she offered ‘black butter‘, a traditional preserve still made in Jersey with liquorice.

By 1946, Mourant had become Director of the Blood Group Reference Laboratory at the Lister Institute in London where he discovered his life’s work. From there on numerous publications were produced, notably ‘The Distribution of the Human Blood Groups‘ (1954). However, funding, it seems always remained an issue. Numerous letters refer to the movement or closure of his laboratories (File ref: PP/AEM/D.2 contains a letter from Michael Perrin of The Wellcome Foundation Limited 28 Oct 1964 regarding Mourant’s use of the space for a lab unit at Boundary House, 91 Charter- house Street, London E.C.1) and even more files contain numerous letters of reference in an attempt to find his staff other work in the field of serology. In a letter of 6 May 1970, Mourant writes:

[File ref: PP/AEM/K.223]. His correspondence with many fellow serologists to obtain blood samples from a variety of races in far flung locations across the globe reveals the logistical and often legal difficulties of transporting the samples safely and in a way that maintained their freshness.

Although this archive generally lacks the ascerbic wit of Francis Crick’s archive, it does have its moments: Mourant evidently took an interest in the story about the ‘The typist with the touch of pink’, a story reported in the Daily Mail in 1960 (?) concerning a girl who sweated pink due to consuming turmeric that had reacted and sent the dye through her pours! [From a collection of cuttings related to blood issues in File ref: PP/AEM/E.28].

With such a hectic and varied career, it is no surprise that Mourant did not have time to marry until the age of 74 when he retired back in Jersey at Dower House, his family farm in St Saviour. It was here he wrote his autobiography ‘Blood and Stones’ (published posthumously in 1995). The appendix to this book lists an unbelievable 460 known publications, proof of Mourant’s prolific career as a writer. The archive includes a typescript copy of this book (in File ref: PP/AEM/A.4) which was published in 1995.

Many more letters were penned from Dower House, not just to his serological comrades, but to his many geological contacts, notably the Société Jersiaise who had a bustof him installed outside the museum there in 1995 by John Doubleday to honour his contribution to the heritage of Jersey.