The Sausage follows the Flag Draw up a list of iconic British foods: menu items that radiate comfort and Britishness to the native and the outsider alike. The chances are that sausages will be somewhere on that list – not, perhaps, as charged with emotional meaning as the roast beef of old England, the haggis or the nice cup of tea, but somewhere well up in the top ten. When Dennis the Menace or his contemporaries tuck into a slap-up meal, it’s likely to feature a huge pile of mashed potatoes with sausages sticking perkily out of it. When C.S. Lewis brings his characters back to Narnia after dangerous adventures in the frozen north and a sinister underworld in The Silver Chair, it’s a meal of piping-hot sausages bursting with meat that really signify a return to home, safety and comfort.

British Sausage Week, running from Monday 1st to Sunday 7th November, celebrates this key component of the national cuisine. For regular readers of this blog it will come as no surprise that the Wellcome Library has relevant holdings: diet is a major contributor to health or ill-health, and what we eat, accordingly, has always been well represented in the Library. 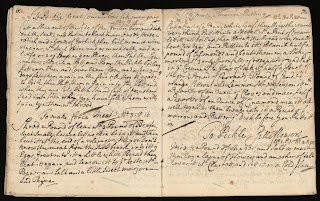 We can begin, as so often when food is the subject, with our recipe books, and in particular with the mostly seventeenth-century ones now digitised. Searching these for “sausage” yields no hits but all this indicates is a need to take one step back: look for “force meat” and the search is more fruitful. To take an example, MS.7998 – one of a series of recipe books from the Godfrey and Faussett families of Heppington, Nackington, Kent – describes how meat is chopped fine and mixed with suet, breadcrumbs and spices to make a substance that can be rolled into meatballs and cooked that way, or – of course – put into a tubular casing (at this stage, probably the animal’s own intestines) and made into sausages. The presence of breadcrumbs, incidentally, is a demonstration to our coeliac readers of why it can be so hard to find gluten-free sausages; the ratio of bread and other padding to meat, of course, is an indicator of the quality and cost of the sausage. 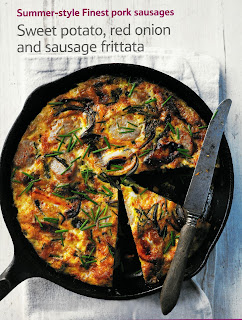 Coming right up to date, the Library’s Ephemera collection continues to document the British diet, in part by scooping up supermarkets’ flyers and leaflets. From 1994 we hold a leaflet issued by Tesco to promote their Superior Sausage Selection and offering membership in the British Sausage Appreciation Society. The varieties span the globe: Tandoori Pork, French & Garlic, Mexican (featuring chilli and mixed beans as well as meat) and Venison Game, as well as the Traditional Pork Sausage and the Hot Mustard Porker. Fast forward to this year, and another Tesco leaflet gives the recipe for a sweet potato, red onion and sausage frittata (rather appetising, we must say, although one blenches at how Dennis the Menace might react to the word “frittata”). Notably, by now the recipe comes with indications of its precise dietary content, with fat, salt and so forth carefully calibrated.

It’s been said that the slap-up feeds enjoyed by characters in British comics reflect their origins in the years of war and austerity, when abundance of food was a distant memory or a dream of the remote future. The Narnia books mentioned earlier, too, have their roots in these years: the initial adventure, The Lion, the Witch and the Wardrobe, takes place when the children in it are evacuated to a country house to avoid the Blitz. When describing the sausages in The Silver Chair, Lewis states explicitly that these were proper sausages, simply full of meat and not mostly bread and sawdust, expecting his readers to recognise that war and austerity had not been good for sausages and had led to a need to make a little meat go a very, very long way by increasing dramatically the amount of padding in the mixture. 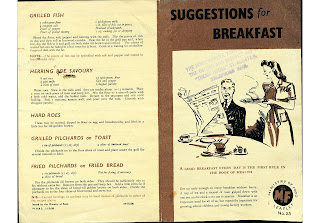 It’s been pointed out by many historians that government control of supplies, coupled with the scientific input of nutritionists (see, for example, the papers of Robert Alexander McCance and Elsie May Widdowson in the Library’s archives and manuscripts collection) meant that the British public was better fed during the Second World War than before it. There was little spare for luxury or self-indulgence, however. Also in our Ephemera collections is a Ministry of Food leaflet “Suggestions for Breakfast”. The leaflet makes it plain that today’s office workers breakfasting on coffee at the station in the course of their commute would be frowned upon:

A good breakfast every day is the first rule in the book of health. Get up early enough to enjoy breakfast. A cup of tea and a morsel of toast gulped down with one eye on the clock is no use to anyone. Breakfast is an important meal for all of us, but especially important for growing school children and young factory workers.

The leaflet sets out various ways of getting sufficient protein other nutrients, some rather surprising: the “Summer Breakfast Dish”, for example, is actually a proper Swiss Bircher-Muesli, as devised by Dr Maximilian Bircher-Benner (a world away from the dry commercially produced muesli now available in packets), not something that fits with clichéd ideas about the insular British diet of this time. Meat, however, occurs mostly in the form of bacon, eked out with a lot of potato or flour to make it go further. The sausage packed too concentrated a meaty punch to be easily permissible or possible at this time, except in the disappointing form described by C.S. Lewis: restoration to its rightful role in the full English breakfast would have to wait for the end of austerity.

With occasional interruptions like this caused by force majeure, however, the sausage has had pride of place in the full English wherever British stomachs have followed the Union Jack. 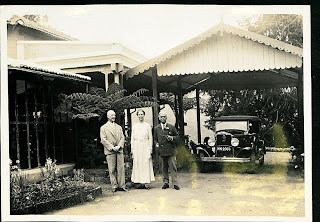 In the years between the First and Second World Wars Sir Robert McCarrison served in the Indian Medical Service in what is now the state of Tamil Nadu. A photograph album in his papers at the Wellcome Library illustrates his lifestyle – the bungalow in wooded hills, the gravel drive, the garden combining British floral borders with tropical foliage and palm trees. It’s a window into the last days of the Raj, a scene familiar to anyone who has read Paul Scott’s novels or seen the television adaptation of The Jewel in the Crown. Amongst his correspondence, we find a letter further demonstrating how a little bit of Britain was maintained in the subcontinent. The letterhead proudly spells out that this correspondence comes from “H. Cooter, Ham and Bacon Curer, Sausage Manufacturer, Direct Importer of Danish Bacon, Hunters’ English Hams and Half Hams, Maypole Dairy Company’s Margarine, Jams and Marmalade.” Also based in Tamil Nadu, Mr. Cooter could provide most of the components of the full English breakfast from one source. He proclaims his firm to be under the no-doubt-grateful patronage of the Governor of Madras – and, one presumes, many other colonials keen for a taste of home.

We mentioned at the start the iconic role of the sausage in British cuisine. There is, of course, another culinary tradition in which the sausage is perhaps even more important, that of Germany. German cooking includes a huge variety of types of Wurst – xenophobic stereotyping in Britain reduces the German diet to beer, sausages and sauerkraut. Another item in the Ephemera collection, from another British colony, perhaps acknowledges this primacy. 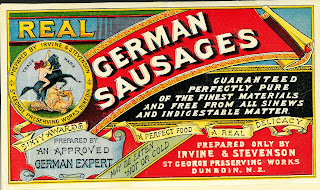 Irvine and Stevenson of Dunedin, New Zealand, proudly proclaim in a late 19th-century flyer that they manufacture “Real German Sausages… prepared by an approved German Expert”. As well as being “A Perfect Food – A Real Delicacy”, these are also “Guaranteed perfectly pure of the finest materials and free from all sinews and indigestable [sic] matter.” You can’t ask for more than that. However, the nervous Briton might well cast his or her mind back to an article in the Edinburgh Medical Journal in 1856 in which W.H. Michael set out a “Case of fatal poisoning by German sausage.” There is, no doubt, a new Richard Hannay adventure to be written around this tragedy, featuring dastardly plots for the control of Europe, sinister Continental masterminds foiled by a sock to the jaw, and a rousing affirmation of the superiority of British pork products.