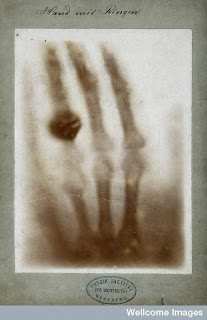 On this day 115 years ago, Wilhelm Röntgen became the first person to observe X-Rays.

Like many a groundbreaking discovery, this process occurred rather fortuitously. Röntgen, a German physics professor, was in his laboratory in Wurzburg, Germany, testing if cathode rays could pass through glass. Whilst doing so, he noticed a glow coming from a nearby chemically coated screen. Unsure as to what caused the glow, he dubbed the rays that had caused it “X-Rays” because of their unknown source.

Before long Röntgen had produced such iconic images as the one shown: the hand of his wife, bones and ring visible against the silhouette of the flesh. Röntgen sent this and other radiograph (x-ray photograph) prints to a selected number of like-minded researchers, including the British physicist Sir Arthur Schuster [1]. His correspondents, by following Röntgen’s techniques, were able to repeat his findings (and so able to support him when he published a paper on his discovery later in 1896).

As news of Röntgen’s discovery was disseminated, its applications to medical research quickly became apparent. For the first time, doctors were able to see inside the human body without surgery. Bone fractures were observed, gallstones were spotted and by the turn of the century X-Rays were being used on military battlefields to search for bullets. Recognition for Röntgen came in the form of the 1901 Nobel Prize for Physics (the first ever awarded).

Scientists were, however, slower to comprehend the harmful effects of radiation. At first, researchers believed X-Rays harmlessly passed through flesh. Within several years, cases of burns and skin damage after exposure to X-Rays were being reported. (Taken slightly out of context, the reported comment of Frau Röntgen when viewing the X-Ray of her hand – “I have seen my death!” – has a chilling edge).

The collections of the Wellcome Library can help chart how X-Rays developed and were utilised by the medical profession. Our relevant collections includes copies of the initial prints sent out by Röntgen and his first article on the subject, to a huge array of material tracing the relationship between medcine and X-Rays (as one example, note the differening ways x-rays crop up in Wellcome Film). For a different approach, a relevant sources guide lists archive and manuscript material on Radiology, Radiotherapy and Radiobiology, and includes our recently catalogued Alice Stewart papers.

As one small example though, let’s conclude with the image shown below. 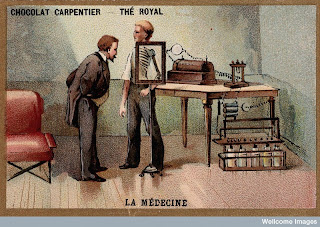 The rather idealised image consists of discoverer, discovery and patient: by showing all three, it does make us consider the process by which X-Rays were produced and remind us of the non-surgical nature of the medium. Ultimately, it also hints at the ways and means of how science was being considered at the turn of the twentieth century. As the text indicates, this was not a trade card for X-Ray machinery: turn the original over and you’ll find two advertisements for chocolate. Evidence indeed, for X-Rays not only extending medicine’s gaze but also embedding themselves in everyday life.

Images:
Wilhelm Conrad Roentgen looking into an X-ray screen placed in front of a man’s body and seeing the ribs and the bones of the arm (Wellcome Library no. 38591i). (For another perspective on this image, see this Wellcome Image of the Month post on the Wellcome Trust blog).
The bones of a hand with a ring on one finger, viewed through x-ray. Photoprint from radiograph by W.K. Röntgen, 1895 (Wellcome Library no. 32971i).

[1] Dr Nora H. Schuster, Sir Arthur’s daughter, presented the prints he received to the Wellcome Institute Library – as we were then called – in 1962.