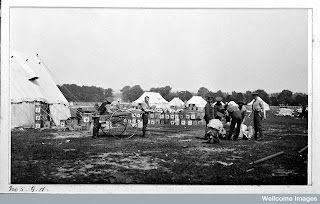 We recently received, from his granddaughter’s executor, a couple of manuscripts of Colonel Frederick Smith (1858-1933) of the Royal Army Medical Corps. When cataloguing these, and turning to the usual sources of reference for information on his career, I discovered that Col. Smith had had a most remarkable career. He had enlisted in the ranks of the Medical Service Corps at a time when it was not expected that this would lead eventually to an officer’s commission. After serving all over the Empire, Smith was posted to Dublin, where he was able to pursue medical studies, alongside his arduous official duties, as well as managing to spend time with his growing family. On his receiving the Licentiates of the Colleges of Physicians and Surgeons of Ireland, the War Office was petitioned to grant him a commission.

As a Surgeon on probation he was sent to the Army Medical School at Netley, where he not only passed the relevant courses, but achieved the Herbert Prize for the best man of the year. In 1890, aged 32, having already served over a dozen years in the ranks, he was commissioned Surgeon-Captain.

He was then posted to the Far East for several years, spent some time working with Sir Almroth Wright in the Bacteriological Laboratory at Netley, and in 1898 was sent to Sierra Leone in West Africa. This was already known, because of its climate and local diseases, as ‘the white man’s grave’, and was about to erupt into what was known as the Sierra Leone Rising or Hut Tax Rebellion against the imposition of exorbitant taxes on dwellings and demands for labour on public works by the authorities of the newly established British Protectorate.

Smith’s experiences in Sierra Leone formed the basis for the fictional work of which we now hold a draft (MS.8701/1) plus an edited clean typescript version prepared by his granddaughter, Jean Overton Fuller MS.8701/2), “Yemma: a Story of ‘The White Man’s Grave’ in ’98” (alternative title “Jungle Savage”). Although he published very extensively on medical research, questions of hygiene, and administrative questions to do with military medicine, Fuller suggested in the foreword to her edited version that ‘he had not the technique of writing fiction’, and this, as well as its ‘”advanced” and shocking’ nature was the reason why the narrative was never published.

His career took him to South Africa during the years of conflict there. Much of his work involved sanitation – he returned to West Africa as Sanitary Officer to the forces there and served as Divisional Sanitary Officer on the North West Frontier of India.

His distinctions for involvement in military campaigns included the Mendiland expedition medal and clasp for his service in Sierra Leone; mention in dispatches, Queen’s medal with four clasps, and the D.S.O. for the Boer War; medal with clasp for service in the Mohmand campaign on the North-West Frontier of India of 1908; and in the war of 1914-18, he was four times mentioned in dispatches, received the C.M.G. in 1917 and the C.B. in 1918. Awards for his work in research, which covered a very wide range of subjects, included the Parkes memorial medal and prize twice, in 1897 and in 1907; the Alexander memorial gold medal twice, in 1903 and1906; and the Enno-Sandes gold medal of the United States in 1903.

Recalled to duty in 1914 on the outbreak of the First World War, Smith was appointed to the command of No. 4 General Hospital in France. The adventures and misadventures in setting up and administering what was intended to be a ‘Stationary’ Hospital are recounted in “Bloodless Adventures of Colonel Xerxes Wilson, RAMC at the Back of the Front in the Opening Months of the Great War” (MS.8701/3), which is indicated to be a pseudonymous account of Smith’s actual experiences.

MS.8701 is not the only material we have illustrating the life, career and opinions of this remarkable man: the RAMC Muniment Collection includes his scrapbook (RAMC/404), a file of miscellaneous papers relating to his activities (RAMC/501), and a copy of his respected work on Modern bullet wounds and modern treatment, with special regard to long bones and joints, field appliances and first aid (1903) (RAMC/713). An obituary may be found in the British Medical Journal for 1933, and an affectionate biographical memoir by Jean Overton Fuller is appended to her edited version of “Yemma”. There is also an entry in Peterkin, Johnston and Drew, Commissioned officers in the medical services of the British Army, 1660-1960 Vol 1, no. 7291.