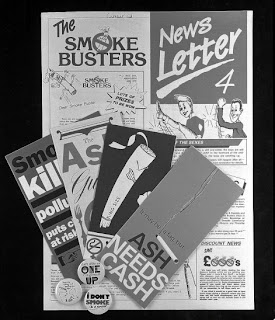 This month’s cataloguing statistics for archives and manuscripts, like last month’s, are dominated by two major groups of archive records. (New cataloguing accounts for all the records added to the database, although behind the scenes retroconversion work continues on the catalogue of the Chartered Society of Physiotherapists (SA/CSP).)

The first of our new cataloguing highlights is the archive of Henry V. Dicks (1900-1977), psychiatrist (PP/HVD). Dicks’s papers cover two highly contentious topics: sex and fascism. In the aftermath of the Second World War Dicks interviewed many former Nazis as part of research into questions about authoritarian psychology and collective psychopathology. Later, his work at the Tavistock Institute centred on marital dysfunction and the couple as a unit of therapy. His papers comprise 14 boxes and are described in more detail in a recent blog posting.

Our second highlight relates to the archive of Action on Smoking and Health (SA/ASH), or ASH, which has been held at the Wellcome Library since the early 1990s. The organisation is still an active one and thus, of course, generates new material for the archive: recent transfers have now been catalogued and the result is a doubling in size of the collection, now comprising 167 boxes and including material up to the early 21st century. The new material documents a period when the tobacco industry was very much on the defensive, striking back against attempts to restrict its advertising and sponsorship activities. Again, a recent blog posting describes the additions in more detail.

A third highlight relates not so much to new content for the archives database, as to what one can do with that content. Library users will be aware that archive and manuscript material is ordered online using the same system (the same reader’s ticket, the same password, and the same interface) as one uses to order books from the stacks. In order to make this happen, periodic movements of data between the two databases have to happen: item-level records – those records that relate to an actual file or volume that can be consulted in the reading room as opposed to records from higher in the hierarchy that represent bigger intellectual groupings – have to be harvested from the archive database, converted to the appropriate printed-matter standard and loaded to the main catalogue. Our last harvest took place on either side of the final weekend in November, and moved over 14,000 new records into the main catalogue, making it possible to order much recently-catalogued or recently-retroconverted material. Collections affected include the papers of Sir Ernest Chain (PP/EBC), Alice Stewart (PP/AMS), the MRC Blood Group Unit (SA/BGU) and many others set out in recent cataloguing bulletins (see October, September and August for some recent examples).

Image: a montage of items from the archives of Action on Smoking and Health (ASH), supplied by Wellcome Images.