By admin | From the Collections

Everyone who has heard the Nativity story will know that the newborn baby Jesus was given gold, frankincense and myrrh by the fabled Three Wise Men. But what do these substances look like, and do they have real medicinal properties? 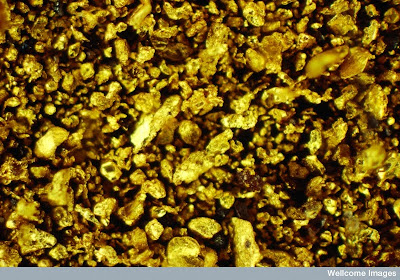 You’ll recognise gold. Shiny and lustrous, it’s been used in jewellery and decorative arts for millennia throughout the world. The Alexandrian Egyptians believed that gold was the “fountain of youth”, for surely something that glowed so beautifully was innate with health. In medieval times gold was used as a healing remedy and, although the properties assigned to it then were more “magical” than medical, gold is used in many forms of modern medicine. 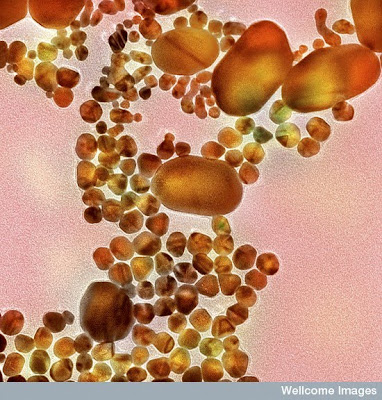 Gold nanoparticles are used in the diagnosis and treatment of cancer. When coated with a cancer antibody they are effective at binding to tumour cells. When bound to the gold, the tumour cells scatter light, making it very easy to identify the non-cancerous cells from the cancerous ones. The particles shown in this transmission electron micrograph are just 10-90 nanometres across.

Frankincense and myrrh have also been used in medicine throughout history, and are now being investigated by scientists to see if they are effective at treating disease. 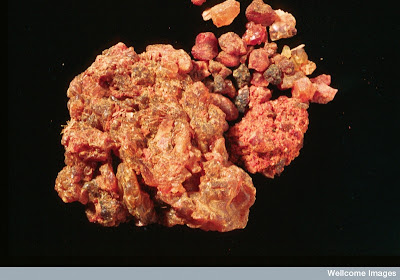 Myrrh is the resin produced by Commiphoratrees when the bark is attacked and the resulting wound reaches the sapwood. It has been valued since ancient times for its perfume and wound healing qualities, due to its antiseptic and anaesthetic properties. Myrrh is named for its bitter taste, so any oral remedies using the resin would have tasted quite unpleasant. The Ancient Egyptians used myrrh as the principal ingredient when embalming mummies. In Ayurvedic and Chinese medicine, it is used for rheumatic and circulatory conditions.

Myrrh is used by many diabetics in Arabic countries to lower blood sugar, although no human studies have proved how effective this treatment is. Bilharzia, a tropical parasitic worm infection, has been treated with a marketed version of myrrh since 2001, although a review of this showed the efficacy of the cure to be low.[1] 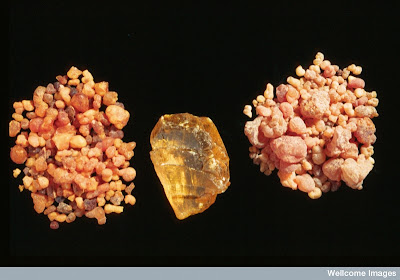 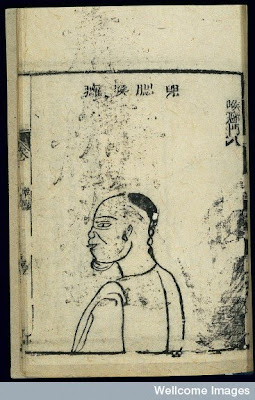 Frankincense comes from Boswellia trees. It is a resin like myrrh, and is called ruxiang in Chinese medicine. The name, meaning “nipple-shaped flower”, was first mentioned in Chinese medicine texts around 500 AD. This woodcut from the 19th century Yanhou miji, or Collected Secrets of Laryngology, illustrates an abcess of the throat that is treated with a traditional Chinese medicine six-flower concoction containing ruxiang.

Frankincense looks more promising as a modern medicine than myrrh. A systematic review of the use of frankincense to treat conditions including asthma, rheumatoid arthritis and Crohn’s disease concluded that the results of clinical trials were “encouraging” (though not “compelling”)[2]. Compounds extracted from frankincense have shown anti-inflammatory properties in clinical trials[3] as well as anti-depressive effects in mice[4], so the modern therapeutic potential of frankincense might be fully realised in future years. Disability and religion: call for papers