Mellow memories of the drug market 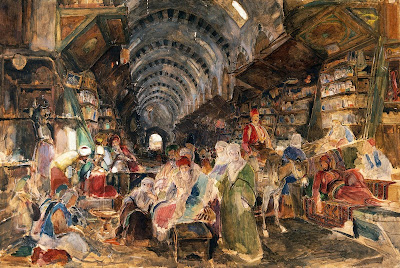 The drug bazaar, Constantinople. Watercolour by J.F. Lewis.
Wellcome Library no. 45051i

Good to see Brian Sewell writing in a mellow mood (though not for long) in yesterday’s ‘London Evening Standard’. [1] The usually acerbic art critic gave a half-page reproduction to one of the Wellcome Library’s treasures that had pleased him, a watercolour by John Frederick Lewis RA (1805-1876) of the Egyptian bazaar in Constantinople.

Sewell commented:
To the art historian accustomed to the meticulous attention to detail affected by John Frederick Lewis, the refinement of his tiny brushstrokes, the ever-increasing intricacy, “the stern precision … (and) completeness of finish to the utmost corners of his canvas” — as John Ruskin put it, gathering him to the bosom of the Pre-Raphaelites in 1851 — his “Drug Bazaar, Constantinople” must be astonishing. Did Ruskin know of this big watercolour painted a year or perhaps a decade earlier (the Wellcome curators give conflicting dates)? It is so loose and free and broad-brush as to resemble more the approach of Delacroix, whose path Lewis had almost certainly crossed earlier in his travels; it gives the impression of a rapid and immediate under-drawing to which most refining work has still to be done, but this it cannot be, for his characteristic watercolours (sold in his day for as much as a thousand guineas) were always as clean and clear on the white paper as were the paintings of Holbein that he so much admired for their even finish. Could it have been so broadly painted because he worked on it under the influence of one of the drugs available in that very part of the Grand Bazaar?” 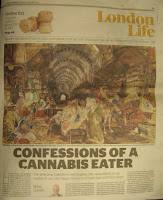 One does not have to endorse that last suggestion to agree that it certainly is something of a puzzle. The finished parts are brilliantly coloured — mouth-watering reds, ochres and greens — but as Sewell says, the rest of the painting would have had to be finished with similarly extravagant swathes and dollops of coloured pigments, rather than in Lewis’s usual craftsmanly, not to say pedantic, manner. It’s the old difference between the followers of Rubens and Poussin: normally Lewis, though a glorious colourist, was in the Poussin camp, but here he is a Rubéniste. 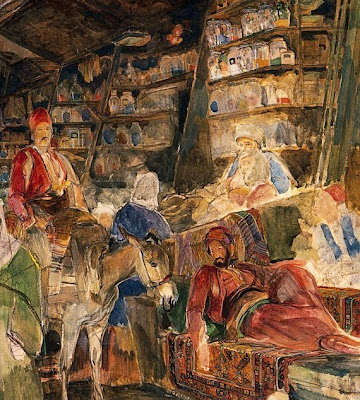 Yet there is no doubt about the attribution. It was bought by Henry S. Wellcome at the Lewis sale at Christie’s on 24 May 1909 (lot 171, for 35 guineas), and as Major General Michael Lewis (author of the 1978 monograph ‘J.F. Lewis R.A.’ on his ancestor) said in a letter to the Wellcome Institute in 1982, the painting “is full of JFL’s characters – not least the tired donkey”.

As far as the dates are concerned, Briony Llewellyn kindly carried out some research on the painting in 1998 and concluded: “It is possible that the Wellcome watercolour was executed while Lewis was in Constantinople in 1840/41, but its large size and complex arrangement of people and objects make it more likely that it was a composition that he began and worked up from sketches (such as lot 210 in the 1877 Lewis sale) later in England.” There are several examples of Lewis returning to Turkish subjects even quite late in life, for instance he exhibited at the Royal Academy in 1870 a painting of “Arab horses and their seises [?], Constantinople”, a painting which is not known to survive (though a study for it was sold at Christie’s New York on 9 December 2004, lot 38).

The location depicted in the Wellcome Library watercolour was identified by Charles Newton of the Victoria and Albert Museum as the building constructed in 1660 and known as the Mısır Çarşısı or Egyptian bazaar, possibly so named because it was endowed by taxes levied by the Ottomans in Egypt. It is described in Godfrey Goodwin’s book ‘A History of Ottoman Architecture’, London 1971, p. 358. Lewis’s position can be pinpointed on Goodwin’s plan of the building (fig. 340) as very close to Goodwin’s number “5”, looking down the long corridor north-westwards. The market sold spices, herbs and drugs, and medicinal leeches were still sold in recent times at the southern end near the flower market.

Another smaller sketch by Lewis, in the Huntington Library, Art Collections and Botanical Gardens (left, from the Huntington’s online catalogue), shows the entrance to the same building as a picturesque muddle. Inside, its high-arched ceiling, long central axis and colourful market stalls made the building a favourite subject for painters: the Wellcome Library has at least two other depictions of it, and another, attributed to a French painter called Charles Pierron, was offered for sale at Christie’s South Kensington on 21 June 2002 (lot 195).

A tip of the hat to the conservators who worked on the painting in 1997-1999, Keith Holmes and Sue Corfield. It’s not clear whether, when Wellcome bought it, the painting was protected by a frame, but by May 1982 it was leaning up unframed on the concrete floor of the Wellcome Institute’s warehouse on a trading estate in Enfield, Middlesex, having been moved there from previous warehouses in Willesden and Dartford. It was incredibly dirty, scuffed in places by other paintings leaning against it, and laid down on Lewis’s blind stretcher (an acidic wooden board that was damaging the paper). 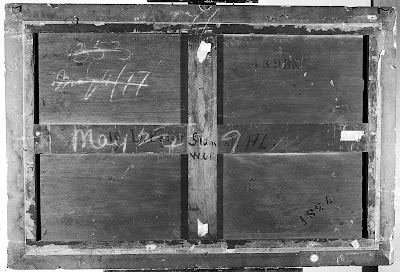 The conservators carefully removed the painting from the stretcher, and the latter was preserved separately, owing to its documentary inscriptions (shown above) including Lewis’s initials JFL and the dates and stencil codes (439BN and 738F) of Christie’s two Lewis sales in 1877 and 1909. (It was these stencils that enabled Christie’s to identify it for us as the work sold in their 1909 sale.) The work was cleaned, the paper was deacidified, and the painting was laid down on a new support (a laminate of western and Japanese papers).

Finally it was framed in a manner suitable for a Victorian exhibition picture, with a gold mount to match the gilded frame, instead of the jarring Modern-Movement-style cream mount so often used inappropriately for old master and Victorian works (left, from the BBC website).

It takes all that to get a picture fit for the admiration of Mr Sewell and his many readers.