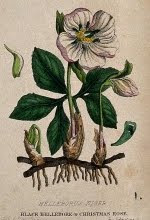 Bright as the silvery plume, or pearly shell,

Warm’d every Sage, and every Shepherd won.

With winter closed about us and the last leaves of autumn lost to the four winds, we may look in vain in our parks and gardens for a flower to raise our spirits amid the cold and gloom. That is, were it not for Helleborus niger, or the Christmas rose, which opens its petals in December and continues to bloom throughout the winter months. 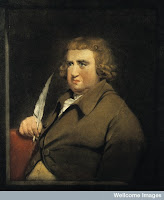 A legend tells that the Christmas rose was so named after it flowered in Bethlehem when Jesus was born, watered by the tears of a child with no offering to make. Erasmus Darwin (1731-1802), physician, natural philosopher, and author of the above lines of verse, was less concerned with such pious tales. When he wrote of the flower in The Loves of the Plants (1789) – a poem extolling the new Linnaean system of taxonomy – it was the great scientific advances of his age that spurred his poetic vision.

Just as discoveries in astronomy and geology were providing evidence of the long duration of time, so Linnaean taxonomy allowed the relationships between the great diversity of species, both plant and animal, to be traced. Sex was the descriptive tool for flowering plants, classified by the stamen and further ordered by the structure of the pistil. Though this was felt by some to be embarrassing, and even scandalous, Darwin revelled in the poetic possibilities such an approach offered.

With light, ironic couplets, he created vivid scenes to illustrate the many strategies of plant reproduction, transforming flowers into beings engaged in dramas of love and courtship. Of the Christmas rose, which had ‘every Shepherd won’, we learn:

Round the gay sisters press the enamour’d bands,
And seek with soft solicitude their hands.
—Ere while how chang’d!—in dim suffusion lies
The glance divine, that lighten’d in their eyes;
Cold are those lips where smiles seductive hung,
And the weak accents linger on their tongue;
Each roseat feature fades to livid green,—
—Disgust with face averted shuts the scene.

This sad ending to an otherwise happy encounter might remain a mystery were it not for the notes that Darwin includes throughout the poem. In a more measured prose, though brimming with the excitement of discovery, he writes:

The Helleborus niger, or Christmas rose, has a large beautiful white flower, adorned with a circle of tubular two-lipp’d nectarics. After impregnation the flower undergoes a remarkable change, the nectaries drop off, but the white corol remains, and gradually becomes quite green. This curious metamorphose of the corol, when the nectaries fall off, seems to shew that the white juices of the corol were before carried to the nectaries, for the purpose of producing honey: because when these nectaries fall off, no more of the white juice is secreted in the corol, but it becomes green, and degenerates into a calyx.

In the example of the Christmas rose, and in the many others that fill the poem, Darwin, in his bold manner, hints at how the vibrant displays of plants have gradually evolved through natural selection, a theory his grandson Charles would provide compelling evidence for some sixty years later.

The Loves of the Plants was wildly successful. Not only was it rapturously received as a poem, it was also one of the first great works of popular science. An earlier book, written as a medical treatise but which has come to be as much admired for its literary scope, also finds cause to mention the Christmas rose. In Robert Burton’s The Anatomy of Melancholy (1621), the plant appears on the frontispiece, and the verse ‘Argument of the Frontispiece’ explains why it is there:

Borage and Hellebor fill two scenes,
Sovereign plants to purge the veins
Of melancholy, and cheer the heart,
Of those black fumes which make it smart;
To clear the brain of misty fogs,
Which dull our senses, and Soul clogs.
The best medicine that e’er God made
For this malady, if well assay’d.

A useful treatment for melancholy though it was considered to be, the caveat at the end of the verse hints at the darker potencies of hellebore, for the same toxins that make it an effective purgative also make it a powerful poison. So should the long winter months or the festive season play heavily upon your humours, it may be as well to keep the Christmas rose at one remove, save an admiring glance while it is in bloom, before the flower fades and the plants of spring once again renew.

The Loves of the Plants was published along with another, equally ambitious work, The Economy of Vegetation, in two volumes as The Botanic Garden (1791). The Wellcome Library holds a number of early editions of this work, along with several early editions of The Anatomy of Melancholy.

The Library also runs two related workshops, Medicine and Literature and Plants and Medicine, which further explore our holdings in these areas. For more information, and to see the associated resource guides, click on the links.