Every Christmas from the 1890s until 1914, Henry Wellcome gave a book to the employees of his pharmaceutical business, Burroughs Wellcome and Co. As some of these titles remain in the Library’s collections, we wondered if they would shed some light on Henry and his feelings towards his staff, as well as attitudes of employers in Victorian and Edwardian times more generally.

Among the titles, there’s some fiction, a little poetry, numerous biographical works and at least one compendium. Most of the titles were popular at the time, but not all of them are remembered in the 21st century. A clear theme from the titles is that of self-improvement and utility. Through examples of self-made men promoting the virtues of hard work, Wellcome was not only giving role models to his staff, but also commenting on his own journey from impoverished childhood in rural America to wealth and success in London. A journey made through sheer hard work. 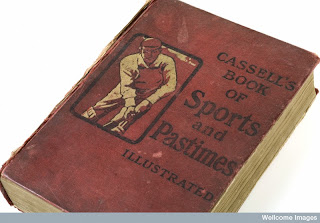 For example, in 1907 Wellcome gave as his Christmas book Samuel Smiles’s Life and Labour (1887). One of the bestselling authors of the late Victorian period, Smiles advocated social advancement through the virtuous acts of hard work, thrift and sobriety. He can even be seen as the forerunner of the various self-help guides you find today. Even in Wellcome’s gift of 1911 – Cassell’s Book of Sports and Pastimes – there is a sense of practicality. This title was full of advice on making, mending and healthy pursuits, which suggested to the staff as they unwrapped their gifts that even their spare time should be spent in a useful, practical manner.

Another clear theme in Wellcome’s choices is his growing interest in Africa. By 1914, he had not only opened the groundbreaking Wellcome Tropical Research Laboratory in Khartoum but also carried out extensive archaeological excavations in Sudan (both activities he felt had practical philanthropic benefits to the local populations).

This interest in Africa comes through in his 1914 gift, The Autobiography of Sir Henry Stanley, edited by Dorothy Stanley (Henry Stanley the journalist and explorer – another self-made man – was a close friend of Wellcome’s). It’s also evident in two other choices from the 1890s: Fire & Sword in the Sudan and With Kitchener to Khartoum – two titles on the British Army’s derring-do in Sudan in the late 19th century.

Of the more famous works of literature Wellcome gave, Henry Longfellow’s romanticised poem of Native American life, The Song of Haiwatha, is suggestive of Wellcome’s childhood in rural Minnesota, growing up close to the Sioux. His choice of Gulliver’s Travels is more intriguing: perhaps Wellcome saw in Gulliver’s adventures a lone individual pulling himself through against difficult odds?

So, Henry Wellcome’s choice of gift does offer a degree of insight into his interests and attitudes, and also how he wished to be perceived. His selections are very much of their time – as are, however, his thoughts on his staff. In 1910, Wellcome chose Charles Darwin’s The Voyage of the Beagle. But he chose it for male employees. Women received copies of the Encyclopaedia of Needlework.

(A version of this post also appeared in the most recent edition of Wellcome News).