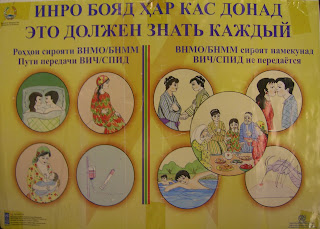 During the year since World AIDS Day 2009 the Wellcome Library has continued to add to its already substantial collection of AIDS posters. This (left) is the first to be received from Tajikistan; indeed it is only the ninth work from Tajikistan (these are the nine) in the entire Wellcome Library catalogue (which as of today contains records for 704,361 works). Although created with support from international organizations, its depiction of a family at dinner and other scenes is thoroughly local. In showing nothing amiss, it resembles some of the earliest AIDS posters from Asian countries. The poster was donated through the good offices of Dr Nikolaj Serikoff of the Wellcome Library. 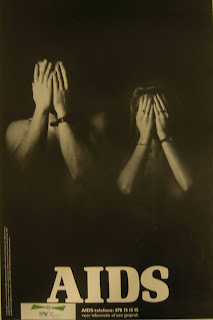 By contrast the earlier posters from Europe did not hesitate to pile on the agony of HIV infection, and this tactic is still shown in this poster (right) from Antwerp published in 1991. The design was selected through a competition held for Flemish art students in April 1990.

The German-language AIDS posters appear to be all now in the Wellcome Library catalogue – “appear” because it is possible that we still have some more somewhere that have not yet been catalogued; and many of the earlier records are first-draft records that need subsequent upgrading. Their completion (as it may well be) is thanks to Anna Ostrowska of the Wellcome Library, who had already catalogued the Polish ones. Many of the more recent posters (published in 2000 and subsequently) show more confidence than their predecessors in defending the status of the HIV positive, and less despair about their future, which may reflect the introduction of Retrovir and improvements in combination therapy. It also suggests that the earlier generation of poster designers and activists had been successful in their aim of taking the stigma out of AIDS. 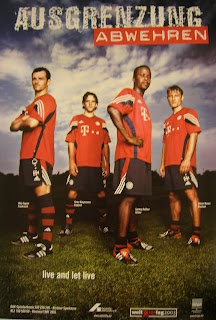 Defending is the very subject of this poster (left): four defenders for FC Bayern Munich, all of non-German ancestry, represent the “defence” of immigrant HIV positive people against discrimination on World AIDS Day 2003: Willy Sagnol (French); Owen Hargreaves (English); Sammy Kuffour (Ghanaian); and Robert Kovač (Croatian). English Wikipedia says that Hargreaves was born in Calgary, Alberta, of a Welsh mother and an English father, and German Wikipedia says Kovač was born and brought up in Berlin. The nationalities may be somewhat fluid, but if these heroes of Bavaria are perceived as assets to Germany, the message stands: “Defend against exclusion. Live and let live”. 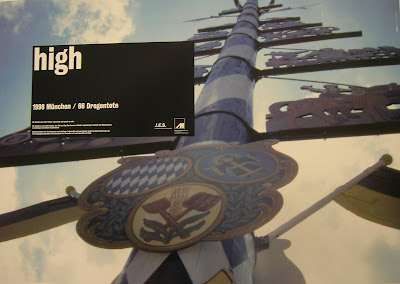 The poster above shows a Bavarian maypole decorated with coats of arms, flags, harvest symbols etc. The maypole stands “high”, and therefore represents consumers of recreational drugs who have become dependent on them. This often hidden sector of the population is alluded to ironically through the most traditional of public symbols. The photograph is by Andreas Doehring and probably dates from 2003. Though the poster was published by an AIDS support charity (Münchner Aids-Hilfe e.V.), the clinical symptoms of AIDS disappear beneath a strident message in favour of non-bourgeois values.