Item of the month, January 2011: A moment of pain and triumph. 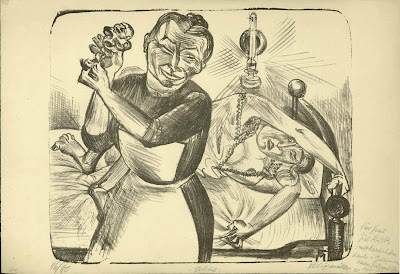 This is a home birth in the 1920s. In other times or places, the two – subsequently three – people involved might have had moral support from women friends of the mother (“gossips”) or technical support from a team of obstetrical consultants and neonatologists. Here however the midwife is solely responsible: no wonder she holds up the new arrival as if she were a Grand Prix winner holding up a trophy. Her moment of triumph is not so glorious for the mother, who attempts to overcome the pain of the delivery by clenching the mattress with one hand, pushing against the bedhead with the other, and pressing her heel against the bedclothes.

The print is the work of the German artist Conrad Felixmüller (1897-1977). It was spotted recently in an auction at Pforzheim in Baden-Württemberg, and is the second of his works to enter the Wellcome Library. The other work (Wellcome Library no. 46958i) is a World War I subject: it shows a soldier who has had a mental breakdown and is incarcerated in a military asylum. It draws on Felixmüller’s never-forgotten four-week service as a hospital orderly in the Arnsdorf asylum which had been taken over as a military hospital.

The picture of childbirth is listed in Söhn’s catalogue of Felixmüller’s graphic works. [1] However the catalogue of the most comprehensive collection of his prints -– the gift of the Felixmüller family to the Kunstmuseum Düsseldorf –- omits it. It’s obviously a rarity [3], but such a striking image deserves to be accessible to a wide public, hence its acquisition by the Wellcome Library is marked by its selection as the Library’s Item of this Month.

The Wellcome Library impression is inscribed by Felixmüller to “Frau Jul. Rock, with the most cordial thanks and greetings”, October 1922. Was she the midwife?