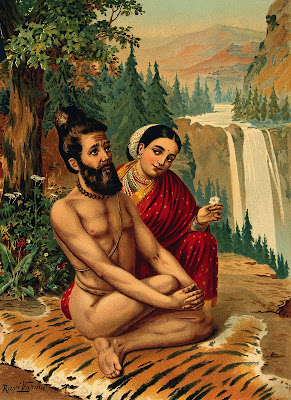 In this oleograph (Wellcome Library no. 26596i) from Bombay, the apsara (nymph) Menakā attempts to seduce the yogi Viswāmitra. She succeeds, and a daughter Sakuntalā was born of their union.

Would you like to sin
With Elinor Glyn
On a tiger skin?

Or would you prefer
To err with her
On some other fur? 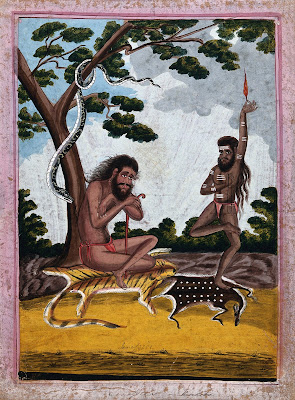 But here’s another picture of some yogis, this time a painting in the indigenous style of the southern Indian state of Tanjore or Thanjavur (right: Wellcome Library no. 28663i). Here too the yogi on the left is sitting on a tiger skin. (The one standing on one foot and holding up one arm is standing on a deerskin.) Is he also a target for the temptress?

The understanding of such pictures is much assisted by a visit to the exhibition The tiger in Asian art: symbol of power and protection which our colleagues at Asia House have put on in their elegant town-house in New Cavendish Street in London (details of the exhibition below). 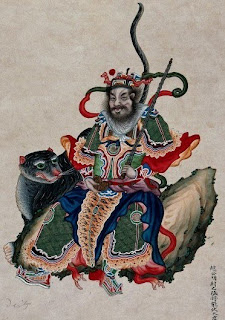 The exhibition shows examples of each of the five principal symbolic aspects of the tiger in Asian art forms. Some of them are symbols of spiritual power: in this Chinese watercolour from the Wellcome Library, the Taoist deity Zhang Dao Ling rides a tiger to represent the taming of the mind and the mastery of nature. The tiger may also act as a messenger between the living and the dead, and tiger-skin loin cloths and mats signify the destruction of the ego or desire, as in the scenes of the yogis shown above.

The tiger is also the representative of material power. As the exhibition shows, the soldiers of the Chinese Emperor were emblazoned with a tiger motif.

In the Wellcome Library, the terrifying power of the ferocious Japanese warlord Katō Kiyomasa (1562-1611) is represented by this triptych of him fighting a great tiger with his bare hands (click on image above to enlarge). The fact that there were no tigers in Japan — for most Japanese the tiger was a legendary beast like the elephant or the gryphon –- emphasizes its symbolic role in this and other documents.

However the most startling item in this section of the exhibition is one of the smallest: a tiny gold tiger head, encrusted with diamonds and rubies, which once formed a finial on the throne of Tipu Sultan, the “Tiger of Mysore”. This is one of four surviving finials, and it is on loan from a private collection. (Two of the other examples were sold for around £400,000 each at Bonham’s auctions in London in 2009 and 2010.) A video in the exhibition shows how the finials were originally displayed on Tipu’s throne, and their later history.

Other sections of the exhibition illustrate the tiger’s role in folklore and as an apotropaic or protective presence, whether protecting the western frontier of the Chinese Empire, guarding the door to a humble wooden house, or an item of clothing used as an amulet to protect its wearer. 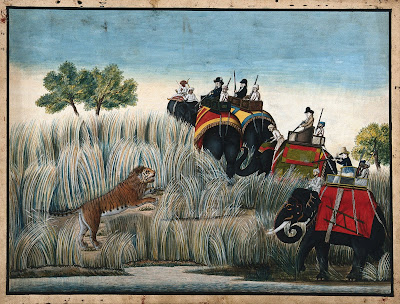 Finally there is the tiger hunt. Originally it was reserved for emperors and kings, as those who kill the tiger assume its power. The hunt thus glorified the bravery and dominance of the ruler. However, as a tragic photograph from the Royal Artillery Museum shows, the hunting of the tiger with guns led to its decline, exacerbated today by poaching and removal of tiger parts for medicinal purposes. As a result there are believed to be fewer than 3,500 tigers left in the wild. A video in a separate room of the exhibition shows what one campaign by members of the advertising industry is doing to persuade consumers in Asia not to purchase medicines containing tiger parts.

In addition to loans from the Wellcome Library there are items from the Victoria and Albert Museum, the British Library and the British Museum, and from private collectors such as James Ivory (of Merchant Ivory fame) and the Ephrussi Collection (Edmund De Waal). The display of items of the finest quality together in a small space has something of the compressed power of the crouching tiger itself. As you go round the exhibition finding tiger symbolism everywhere, just think how much Carl Gustav Jung would have enjoyed it!

The tiger in Asian art: symbol of power and protection is at Asia House, 63 New Cavendish Street, London W1G 7LP. Last day 12 February 2011. Open Monday-Saturday 10.00-1800. Admission free. On Thursday 27 January 2011 Dame Jessica Rawson, Professor of Chinese Art and Archaeology, Oxford University will give a talk “Chinese Tigers – Past and Present”, tracing the history of the image of the tiger in China from around 1200 BCE to modern times. Time: 18.45–19.45; tickets £10 or £6 from Asia House at http://www.asiahouse.org .