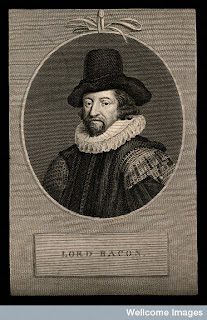 He didn’t discover a new element, spot a new star in the night sky nor make a major medical breakthrough, but there’s little doubt Sir Francis Bacon, 1st Viscount St Alban (1561-1626), is one of the most influential figures in the History of Science.

Given this weekend marks the 450th anniversary of Bacon’s birth, we thought we would mark the occasion with a blog post. One of the most prestigious politicians and lawyers of his age – he served as both Attorney General and Lord Chancellor – Bacon has been hailed as the founder of modern science, promoting in his writings notions of planned observation, experiment and reasoning which would form the basis of the ‘Scientific Revolution’ of the 17th century.

Amongst the range of works by and about Bacon held in the Wellcome Library, are copies of the Novum organum, the work which best illustrates Bacon’s approach. 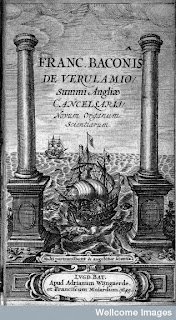 The frontispiece is illustrative of the themes of the book. It shows two trading ships sailing through the Pilars of Hercules – the mythical gateway to the Atlantic from the Mediterranean but also a symbol in this case of the limits of Classical wisdom. Bacon’s Novum organum (“The New Organon”), aimed to replace Aristotle’s Organon and emphasise new observational research over the received wisdom of the Ancient Greeks. The trading ships are sailing to and from the New World – “many will travel and knowledge will be increased” reads the Latin quote at the bottom. Bacon believed that systematic observation of the natural world would lead to a greater understanding of it and – eventually – to economic wellbeing.

So, knowledge, observation, economics and the invovlement of the state are all bound up in Bacon’s optimistic vision: one that is still hugely influential today.