In May 1940 Sir Charles Wilson (1882-1977) received a summons from the War Cabinet: he was to become the personal physician of Winston Churchill, who had become Prime Minister just two weeks before. The health of a political leader is always important; when he is in his mid-sixties and has taken office at a time when nothing less than national survival is at stake, his every move, cough or dizzy spell is a matter of historic importance. For the next twenty-five years Wilson – who became Baron Moran of Manton in 1943 – was Churchill’s doctor, until doctor and patient were in their eighties and nineties respectively and Moran had long retired from any other practice.

Moran was thus privileged to have a front-row seat at the making of history; and we, decades later, are lucky that it was this man who filled the seat. Moran’s life was marked by an almost Puritanical commitment to honesty, to facing facts squarely (he was described, according to his DNB entry, as “a Roundhead among Cavaliers” in Churchill’s circle) and by an unwillingness to play the game of medical politics even at cost to his career. When summoned by the War Cabinet, he was Dean of the medical school at St. Mary’s Hospital, Paddington, and a Harley Street physician (counting among his patients both Brendan Bracken and Lord Beaverbrook, both Churchill confidantes: hence his appointment); he was, however, poor by Harley Street standards and had long looked forward to the establishment of some form of National Health Service, coming into conflict with his fellow-professionals over this. Like many of the men who directed the Second World War effort, he brought to it memories of the First: he had served in the front line as a member of the Royal Army Medical Corps and become fascinated by issues of morale and courage, of how it is that one man could endure shattering bombardment and pitched combat whilst another collapsed under the strain. His notes on this subject formed the basis of lectures on “The Mind in War” in the 1930s and eventually of his 1945 book The Anatomy of Courage. He was, therefore, ideally placed to study and analyse the effects on Churchill of long-term stress, and whilst he regarded his patient as the greatest Englishman since Pitt the Elder (see, again, his DNB entry) he was clear-eyed about Churchill’s character failings or lapses of behaviour. 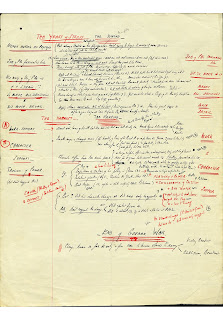 Controversially, Moran published a book of his experiences not long after Churchill’s death: Winston Churchill: the Struggle for Survival, 1940-1965 (1966): his commitment to honesty and in this instance to capturing his observations for the historical record taking precendence over what was prudent in terms of his popularity. The manuscripts on which Moran drew for this book have remained closed for sixty years after their creation (the closure was initially a condition stipulated by Moran’s family when his papers were deposited at the Wellcome Library and of course has been sharpened subsequently by the passage of the Data Protection Act, some thirty years after Moran published his work and sixteen years after the papers were deposited). Now their closure period begins to elapse: last year one notebook was released (along with two other files relating to medical administration) and today a major batch of drafts relating to the war becomes available for study, along with other papers from Moran’s archive (full listing below). Over the next fifteen years there will be a steady flow, until, by 1st January 2026, the majority of the Moran papers will have been opened (a few papers containing detailed medical information will have longer closure periods).

In the papers released today, we read Moran’s accounts of journeys to Canada to meet Roosevelt and to Casablanca for the first big conference of the three Allied leaders, Churchill, Roosevelt and Stalin. The interpersonal tensions between men stretched to the limit are clear. Stalin is particularly difficult to work with, as one would imagine:

As for the twelve different items the Allies had in mind to put on the Agenda [for the Casablanca summit], Stalin brushed them aside: they did not interest him, he said in his rude way.” (PP/CMW/K.5/1/2)

Closer to home, another ally proves hard to take for the stressed Prime Minister:

De Gaulle is another story, for he does seem to go out of his way to be difficult. He first dawned on me in the hall at Chequers when he was about to leave for London; an improbable creature, like a human giraffe … he seemed to sniff down his nose at mortals beneath his gaze. … The P.M. is a bad hater, but in these days when he is stretched taut certain people seem to get on his nerves. De Gaulle is one of them. His cold austerity chills him. (PP/CMW/K.5/1/1)

Churchill himself is examined closely, in passages written towards the end of the conflict when Moran takes stock of the traits of character that both helped and obstructed the war effort: the supreme self-confidence that enabled Churchill to take on and hold the responsibility of wartime leadership leading also to problems in his management of his subordinates. In a particularly revealing file, PP/CMW/K.5/5/1, we read

While he could concentrate for six hours at a stretch on intricate documents and feel at the end of it that he was just beginning the night’s work … he also had grave disabilities which added to the strain. He had no gift of devolution. He liked a finger in every pie. Rowan [Leslie Rowan, Churchill’s private secretary] complained at Potsdam that he could not get the P.M. to read important papers and yet he would not hand over anything…

Perhaps Winston found that when he did choose a man to do a job of work he so often let him down. For he had no gift of picking people. It was his Achilles heel… he is always losing opportunities of learning by his desire to instruct, or at any rate by his urge to lay down some proposition. That is the secret of his inability to pick the right people, he isn’t interested in them. 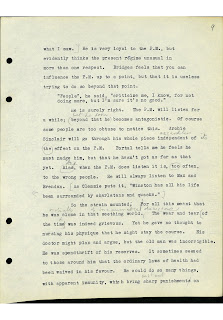 Later in the same file Moran quotes Clementine Churchill as saying that “Winston has all his life been surrounded by charlatans and quacks”, with “Brendan [Bracken] and Max [Aitken, Lord Beaverbrook]” cited as examples.

When Moran published his memories in 1966 Churchill the war hero was still fresh in people’s memories and the candour of his physician was bound to be controversial. Yet the picture that emerges from the book and from these manuscripts, scribbled with corrections, jottings and fine-tunings, is a more human one and in the end – as Moran himself asserted – one that if anything adds to our admiration of the wartime leader. What we see here is a man stretched to the limit, dealing day by day with matters of global significance, driving himself on without rest and – let us remember – someone who does not have the benefit of hindsight and unlike us does not know that the story will come to a victorious conclusion. That he should be fallible is human; the character failings that Moran notes are, as he surmises, perhaps inevitable concommitants of the self-confidence and drive that made it possible to take the job on in the first place. In Moran’s papers we can see the sheer human wear and tear of life at the nerve-centre during the nation’s finest hour; catch our breath, and wonder how we might have measured up. It is our good fortune that these pivotal years in the nation’s history were recorded by this clear-eyed observer and that he captured his impressions for us.