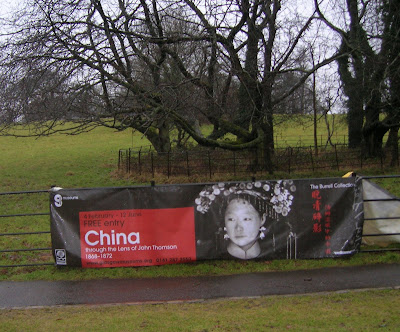 Inaugurating the Chinese Year of the Rabbit, the exhibition China through the lens of John Thomson 1868-1872 opened at the Burrell Collection in Glasgow on 4 February 2011. It was opened by Professor Nick Pearce (Director of the Institute for Art History and Professor of Chinese Art in the University of Glasgow): his book Photographs of Peking, China 1861-1908 (2005) brilliantly identified in Durham University a collection of early photographs of China by both John Thomson and his associate Dr John Dudgeon, physician to the British Legation in Beijing. 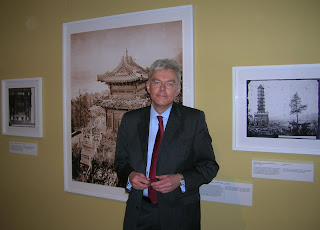 At the opening Professor Pearce (right) emphasized the pioneering nature of John Thomson’s endeavours, as Thomson travelled not just to Beijing and the Treaty Ports but also off the beaten track and into the landlocked provinces. Chinese music was provided at the opening by Eddie McGuire (flautist, composer, and a member of the first Scottish music group to tour the People’s Republic of China in 1991) and Hooi Ling Eng, both members of the Sino-Scottish group Harmony Ensemble.

Although the photographer John Thomson (1837-1921) was a Scot, this is the first exhibition in Scotland to be devoted to his photographs of China. The exhibition contains prints from a selection of his glass negatives which were acquired by Henry S. Wellcome in 1921 and are preserved in the Wellcome Library. 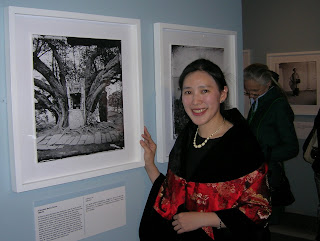 It shows the range of Thomson’s work: the physical environment of China (rivers, mountains, agricultural land, palaces and hovels); the life of the poor, whether as street vendors in the cities or rice and tea workers in the countryside; Han and Manchu, Buddhist, Muslim and Christian; the Imperial family, grandees, mandarins and merchants; and intricate portrayals of family relationships. The exhibition was installed in the Burrell Collection’s exhibition gallery and curated by Dr Yupin Chung, Curator of East Asian Art with Glasgow Museums (above left, with one of Thomson’s photographs of an ancient tree-shrine in Taiwan). 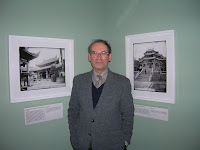 The exhibition continues until 12 June 2011. Admission is free, and there is a programme of talks by the curator and other activities. Haunting music in the gallery comes from a poetic video of Thomson’s work by Thomas Jacobi, with an Imagistic commentary “Motes of living light” by the poet David Greygoose and flute accompaniment by Eddie McGuire. 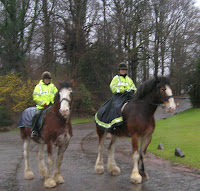 Visitors can also see the amazing collections of the Glaswegian ship-owner Sir William Burrell (1861–1958) including (among other things) Chinese ceramics from the Tang, Song and Ming dynasties; paintings by Degas, Cézanne and others; and the great Warwick Vase. The collection is housed in a spacious and free-flowing modern building which has won several awards: it is sited in Glasgow’s beautiful Pollok Park, where one might meet the friendly rangers patrolling on gigantic Clydesdale horses (left).

The exhibition has been shown with acclaim in four venues in China, starting in Beijing in April 2009, and subsequently in Liverpool and Hartlepool in the UK. Further showings of the exhibition are being arranged: see this website for the content of the exhibition, and please contact the Wellcome Library with suggestions of additional venues.