At the Military Academy 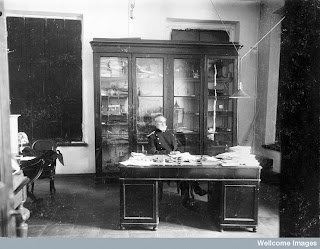 On first impression, this photograph appears to be of a military figure. The epauletted tunic, the shuttered blinds… perhaps a pre-1914 army planner, taking a break from planning his country’s defence from a foreign force?

The photograph was indeed taken before the First World War, and it does show an official at a Military Academy – the Imperial Military Academy in St Petersburg, to be precise. But the figure shown is not one of the Czar’s officers, pondering threats to the nation, but one of the most influential scientists of the 20th century – physiologist I.P. Pavlov.

Given how famous Pavlov’s work on the conditioned reflex is, it’s perhaps odd not choosing a photograph to mark the anniversary of his death that shows him in a laboratory (or at the very least, with some salivating dogs). However, given that Pavlov died 75 years ago today in 1936, this photograph is suggestive of how well Pavlov was regarded by the changing rulers of his homeland.

Awarded the 1904 Nobel Prize for Physiology or Medicine, Pavlov was obviously an internationally recognised scientist by the time of the Russian Revolution of October 1917. However, a 1921 decree – signed by Lenin – noted Pavlov’s achievements “to the enormous significance to the working classes of the whole world” and for the rest of his life, Pavlov and his team were given an enormous amount of freedom for their research. For indication of that, take a look at Conditioned reflexes and behavior, a film shot in 1930 and which was digitised as part of our Wellcome Film project.