Item of the Month February 2011: Notes on Yagé 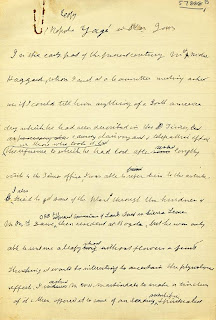 Back in July last year, we wrote about some items from our collections relating to Arthur Conan Doyle. We deliberately left one item out from that post, as we wanted to write in more detail about it at a later date.

So, as our Item of the Month for February 2011, here’s a post dedicated to this item: a manuscript that links Conan Doyle, fellow novelist H Rider Haggard and a hallucinogenic plant from South America (WMS/Amer.148).

It’s a report from 1927 by Edward Morell Holmes, an English botanist, into the properties of Yagé, a South American drug, which – refering to a conversation initiated by Sir H. Rider Haggard, author of King Solomon’s Mines – “causes clairvoyant and telepathic effects”. The manuscript refers to a full account of the drug by A. Rouhier in Bulletin des Sciences Pharmacologiques, 1926, 33, 252-261 (which Holmes’ notes summarise) and also to South American knowledge of Yagé.

But the Conan Doyle connection comes with the most fascinating aspect of this manuscript. The notes talk of a tincture of the drug prepared by the leading pharmacist W.H. Martindale (1875?-1933) and Holmes’s attempts to pass it on to “some of our leading scientific Spiritualists to experiment with including Sir A. Conan Doyle, Professor (Sir) Oliver Lodge, and Sir (W.) F. Barrett”.

These beliefs of these men in the ability to contact the spirit world is well recorded: Conan Doyle took his belief strongly enough to publish a History of Spiritualism in 1926; Lodge, a key figure in the development of the wireless, was like Conan Doyle a member of the Society for Psychical Research, and Barrett was a physicist and the author of such works as The Physical Phenomena of Spiritualism and On The Threshold Of A New World Of Thought. 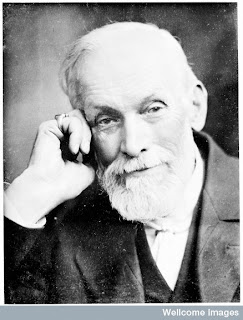 But do we know if their interest in spiritualism was enough for these men to test out the “telepathic effects” of the tincture”? Did Holmes, indeed, ever contact them? So far, our research has drawn a blank…

Whilst we often feature as our Items of the Month, material from the Library that is well-researched, here’s an instance of a manuscript we feel in need of more attention. Given its hoped for attraction to men of letters from the early 20th century, we even wonder if the notes may even shed light on the interest in Yagé of the beat author William Burroughs in the 1950s, in light of possible explanations as to how Burroughs developed an interest in the drug.

We wonder then, if Holmes’s notes featured here may add something to this debate: even if not, they shed an intriguing light on scientific and literary circles in the early part of the twentieth century, and suggest a topic that we feel would have piqued the interest – and possibly the taste buds – of Holmes’s namesake and Conan Doyle’s most famous literary creation.

With thanks to Mike Jay