By admin | Events and Visits

In exactly two weeks, the Wellcome Image Awards will be announced at Wellcome Collection. Louise Crane looks back to October, when the judging of the awards took place.

Last year, a team of picture editors, scientists, writers and broadcasters met in a room at the Wellcome Trust to select the winning pictures for the Wellcome Images Awards 2011. The judging panel was assembled and facilitated by Dr Laura Pastorelli, who acquires new biomedical images for Wellcome Images. She says, “Our eight judges represent the world of science and media. They all recognise the great value of scientific imaging – not only to research, but also for communicating this research to a wider audience. The judges were looking for recently acquired images that were visually stunning and conveyed scientific information in an interesting way. They also looked for skilful use of imaging techniques.” 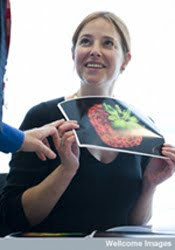 Enter Dr Alice Roberts, who presented the awards in 2009 and was asked back as a judge for this year. Alice is not only a scientist and broadcaster (you may know her from BBC’s Coast and Don’t Die Young) but an artist too. Before the judging took place, she said “I love judging the Image Awards – there is always a great selection of beautiful, surprising and thought-provoking images to pore over. But that makes it very difficult as well!”

Over the next hour, the room buzzed with the deliberations, as Alice and seven other judges mulled over the 180 long-listed images laid in front of them. “What’s the story behind this image? Have I produced this myself, but better? If I was a teenager would I stick this up on my bedroom wall?!” were just some of the judges’ musings.

Also on the panel was another BBC presenter, Dr Adam Rutherford, who runs the podcast and video department at Nature. Adam explained that in the initial stages of judging, he was looking for images that gave him a strong reaction: something striking, or something that had never been seen before. Catherine Draycott, Head of Wellcome Images explained further: “To start, we eliminated anything where the image quality (focus, composition, etc.) wasn’t up to the standard we’d expect for the technique and the magnification. Then we started to home in on the images that stood out from the rest. We talked about what each one represented and how well this was conveyed by the picture.” 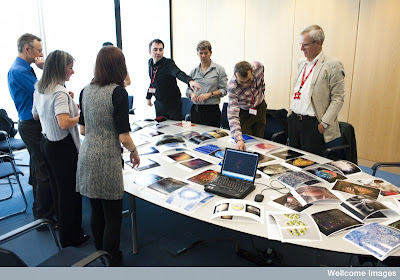 The long-list was narrowed down to a selection of around 50 images that the judges discussed in great detail. Aesthetics were admired, and detailed technical information unpacked. Laura’s expert knowledge of imaging techniques was complemented by Dr Robin Lovell-Badge, a scientist who is highly recognised in the field of developmental biology, not least for discovering SRY, the gene that determines if a developing embryo will become male. Sometimes the beauty of an image is almost a by-product of cutting edge imaging technique, but it is beautiful nonetheless. The Wellcome Image Awards are a great showcase for this. Robin explains, “anything that brings the beauty and the fascination of science to the general public is a good thing.” 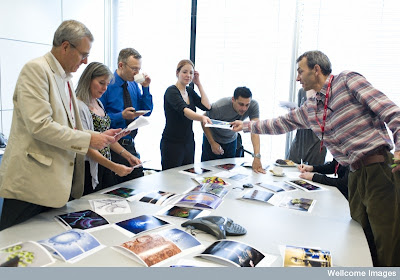 BBC medical correspondent Fergus Walsh was another of the judges. He commented on the impressive range of the images submitted and the variety of imaging techniques, and said that many images gave “a new insight into medicine and science.”

A few pictures polarized debate. One slightly blurry photograph caused a minor argument. “It’s not out of focus, it’s just got many focal planes!” exclaimed Adam. 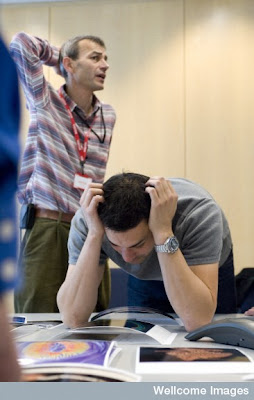 Some images totally absorbed our judges. I caught Eric Hilaire, Picture Editor at the Guardian, with a print in his hand staring intently at its patterns and colours. I could imagine a swirl of thoughts going round his head, which he elucidated later: “The first time I saw the print of this photomicrograph, I, for a second, wanted to look for a signature as if it was a painting. Later I tried to work out what it was that made me react this way: the subtle framing as well as an evocative choice of colours that recalls the brightness of dry pastel. Then, it was also the way I was reading this picture: a large red sun spreading its rays toward rows of shooting plants, maybe in a garden bed?”

Unfortunately for the readers of this blog, I can’t say which image he’s describing so evocatively until the awards are announced on February 23rd. 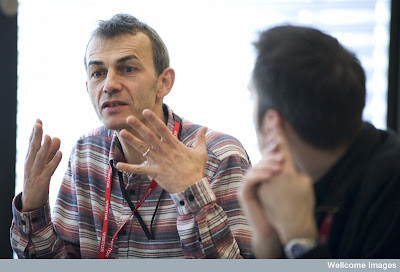 Eventually, 21 winners were chosen by the panel. John Durant, Director of MIT Museum, who had flown from Boston to be on the panel, announced: “We have a great final list of images to be displayed.” The winning images will be on display at Wellcome Collection from February 24th until July.

What can you expect from the exhibition? Here’s a clue, from James Cutmore, Picture Editor at BBC Focus and second-time judge, about just one of the winners: “It’s one of those pictures that truly intrigues people, because it shows an everyday occurrence in a completely unexpected way.” All the award-winning images provide a vision of science that you’ve not seen before, a close-up view of the beauty of nature. As James hints, expect the unexpected.