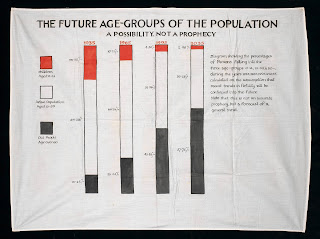 The records of the Population Investigation Committee (PIC) have been catalogued through a grant from the Nuffield Foundation and are now available for consultation in the Wellcome Library (Ref. SA/PIC).

On 16 February 1935 Sir Alexander Carr-Saunders, Charles Booth Chair of Social Science at the University of Liverpool, and Chairman of the Positive Eugenics Committee, delivered the Galton Lecture of the Eugenics Society entitled ‘Eugenics in the Light of Population Trends’. Carr-Saunders drew attention to the falling birth rate and concerns over the fertility of married women and a decline in the size of the family. He argued that ‘some organisation, with the whole population situation under review and desires to construct an adequate programme, should examine all the proposals made to deal with these difficulties, and weave them into a coherent population policy.’ [1] As a result, the Council of the Eugenics Society met to discuss the formation of an independent research body – the Population Investigation Committee.

The first meeting of the PIC was held in June 1936. Sir Alexander Carr-Saunders was elected Chairman of the Committee, C.P. Blacker the General Secretary, and David Glass the Research Secretary. One of the first publications of the new committee discussing the concerns facing the population was published in 1936 entitled The Future of Our Population? (SA/PIC/H/4/7).

Today the PIC are known for publishing the journal Population Studies as well as providing scholarships. However, the original purpose of the PIC, as stated in its first annual report (SA/PIC/B/1), was ‘to examine the trends of the population in Great Britain and the Colonies and to investigate the causes of these trends, with special reference to the fall of the birth-rate.’ Its remit was research, not the formation of policy. As such the PIC had a prominent role in several national surveys to investigate the economic and social factors affecting changes in the population.

A large proportion of the records of the PIC include correspondence and papers relating to research projects on vital statistics, foreign population policies, birth control, marriage, fertility, maternity services, social mobility, and the health and development of children (SA/PIC/F). Surveys involving the PIC include the Maternity Inquiry of 1946 in collaboration with the Royal College of Obstetricians and Gynaecologists, which developed into the National Survey of Health and Development (SA/PIC/F/7); the Scottish Mental Survey of 1947 in cooperation with the Scottish Council for Research in Education to examine the trend of intelligence in children aged 11 years old (SA/PIC/F/8); a national survey concerned with marriage and divorce in 1959-1960 (SA/PIC/F/14); and a national survey of fertility and birth control practice in 1967-1968 (SA/PIC/F/15).

As well as involvement in research projects the collection documents the broadening interests of the Committee and their concern with the encouragement of research in the field of demography. The proposal to establish a journal devoted to demographic research was first mentioned in 1945 (SA/PIC/C/2). Volume One of Population Studies was published in 1947 as the first English language journal exclusively concerned with demography. Whilst the PIC was actively involved in research, the Journal often reported the results. In 1963, David Glass, then Chairman of the PIC, applied to the Ford Foundation for a grant to fund a postgraduate demographic training programme in collaboration with the London School of Economics and Political Science (LSE) with special reference to students from developing countries. The grant was approved and the first students began their studies in September 1965. Although LSE took over complete responsibility of the programme in 1980, some staff continued to divide their time between the Population Studies department of LSE and the PIC.

The 52 boxes of papers of the Population Investigation Committee, now available in the Wellcome Library, are a testament to the influence and contribution of the Committee and its members to the field of demography. They not only demonstrate the social context and development of the PIC, but they contain detailed information relating to research projects which continue to have significance for the study of epidemiology today, such as the National Survey of Health and Development. The collection is a valuable resource and we hope that the collection will be consulted by those from a wide range of disciplines.

To celebrate the launch of the historical archives of the PIC at the Wellcome Library, the Population Investigation Committee will be hosting an afternoon symposium at the Wellcome Conference Centre on Friday 18 February. This free event aims to highlight the importance and influence of the Population Investigation Committee throughout its history. For further information see http://www.lse.ac.uk/collections/PIC/.

Image credit: Bar chart, c.1935, showing projected percentages of persons in particular age groups and included in The Future of Our Population? Reproduced from the Eugenics Society Collection (SA/EUG/G.31/3) with the kind permission of the Galton Institute and the Population Investigation Committee.