Stella Browne in the archives at the Wellcome Library 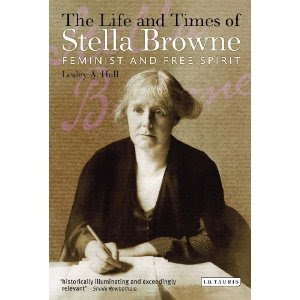 This week my biography of Stella Browne, early twentieth century British feminist sex radical and socialist, was published by I B Tauris: The Life and Times of Stella Browne: Feminist and Free Spirit. While it contains the fruit of extensive research in archives and libraries over three continents, a solid core of essential material for any study of Stella Browne is to be found in the archives at the Wellcome Library.

She was one of the founders of the Abortion Law Reform Association (1936). Her own activism on the subject during the previous two decades had been an inspiration to other campaigners – in her chronology of the movement, Janet Chance placed one entry, STELLA CAMPAIGNS ALONE, between the 1861 Offences Against the Person Act on which the criminal status of abortion rested, and the informal discussions in 1935 leading to the inauguration of ALRA. Stella Browne’s activities in pursuit of ALRA’s aims are particularly well-documented for the latter part of the 1930s. A file of correspondence (SA/ALR/B.5) with her colleagues during the 1940s and 50s, following her move to Liverpool for family reasons during the War, reveals how committed she remained even when she was physically distant, poor, ageing and in deteriorating health, communicating with them on matters of mutual interest until very shortly before her death.

This is however by no means her only appearance in the collections in the Wellcome Library. Her rather tense relationship with Marie Stopes, whom she had known prior to the latter’s emergence into notoriety with the publication of Married Love in 1918, is discernable in a small group of letters preserved among the latter’s ‘ML [Married Love] – GEN’ correspondence (PP/MCS/A.42). Although there is a letter of warm congratulation about Married Love and commiserations with the difficulties the US edition was experiencing under the Comstock Laws, the tone soured rapidly. In 1922 Stella Browne was appalled by Stopes’s rewriting of the history of her involvement with birth control to conceal Margaret Sanger’s priority. This escalated into high levels of antagonism on both sides, and Stopes’s correspondence in the British Library indicates that she even considered suing Stella Browne for libel (a rather pointless exercise, given Stella’s continual state of penury).

Her relations with Dr C P Blacker, General Secretary of the Eugenics Society, were also somewhat fraught. Although she attended meetings at the Eugenics Society, and was briefly a member, her antipathy to the class-biased and anti-feminist nature of hereditarian ideology is extremely well-documented, as is her opposition to authoritarian solutions to social problems. However, as part of Blacker’s reform eugenics initiative of the 1930s, the Society was increasingly forming strategic alliances with campaigners in related areas such as birth control and family allowances. Although when Stella Browne first mooted the topic of abortion in a Society meeting, it was met, according to Alice Jenkins of ALRA, by a silence ‘that could be felt’, the question of legalisation was at least up for discussion by the later 1930s, and the Eugenics Society constituted a forum where ALRA might find potential allies and sympathisers.

Blacker’s own views on Stella Browne, expressed to various correspondents in his capacity as General Secretary of the Eugenics Society, and among his personal papers, were not sympathetic (‘moderately mad’). She contacted him about a delegation to the Ministry of Health being organised by the National Birth Control Association in 1933 – her letter survives among his personal papers (PP/CPB/C.3/3) – with which he was very reluctant that she should be involved.

She enjoyed better relations with other bodies active in the campaign for birth control, including the Malthusian, later New Generation, League, and the Workers’ Birth Control Group. However, although she was clearly very active in promoting the latter’s endeavours to obtain official permission for birth control advice to be given in local authority maternity welfare clinics, her name is striking absent from their literature, a little of which survives among the archives of the Family Planning Association. The clue to this mystery is provided by Dora Russell’s files relating to the WBCG in the International Institute of Social History, Amsterdam, which indicate a policy decision that the names associated with the group should all be of married people who were parents (except for Dorothy Jewson, MP, their main Parliamentary ally). Stella’s strong ties with the WBCG are confirmed by the very significant overlap in membership between the by then defunct WBCG and the founding group of ALRA.

Her enduring connections with the wider world of sexual reform movements even in later life are testified to by her listing as one of the Vice-Presidents of the Society for Sex Education and Guidance, active during the 1940s and 50s, literature of which has been preserved among the archives of the Family Planning Association.