A grim day in Minnesota 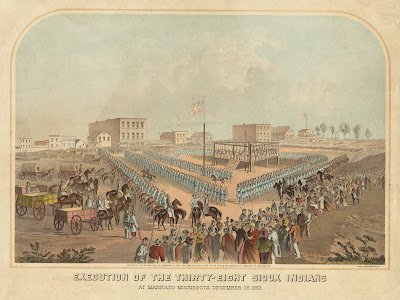 This colour lithograph (click on image to enlarge) was recently found in a drawer in the Wellcome Library containing personalia of Henry S. Wellcome, the founder of the Library. It shows the hanging of 38 Sioux or Dakota leaders in Mankato, Minnesota, in 1862. There is an impression of it in the Library of Congress (as one would expect, for deposit in that Library was a necessary condition for registration of copyright in the USA), and a few other impressions are also documented, but the significance of the Wellcome Library impression is that it had belonged to someone who was actually caught up in the massacre by the Sioux for which their leaders were hanged –- the event portrayed in in the lithograph.

Henry S. Wellcome was only nine years old at the time. The state of Minnesota had been created in 1846-1858 out of lands that were an enclave within unceded Sioux territory. It passed to the United States under compensation promises that were never fulfilled owing to some conditions in the small print that overruled them in favour of competing compensation promises in favour of white interests. The non-payment of the compensation became a runnning grievance for the Sioux, who regarded the white settlers in the Minnesota Valley in much the same way as Hamas today regards the Israeli settlements on the West Bank of the River Jordan. 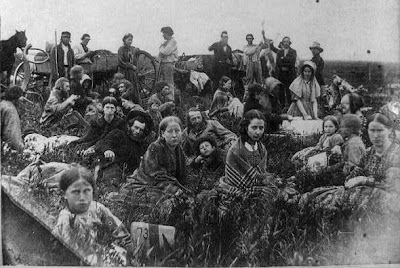 As in the Middle East, a series of barbarous tit-for-tat murders and massacres ensued. In August 1862, anticipating an all-out attack by the settlers, the Sioux started a general uprising, attacking ferociously some outlying settlements and even townships such as the one in which the Wellcome family lived, Garden City, Minn. The boy Wellcome assisted his uncle Jacob, the town surgeon-apothecary, in treating the wounded. Casualties among the settlers would have been greater but for the protection of another Native American tribe, the Winnebago.

The United States did indeed respond in kind, defeated the Sioux in battle, and tried the prisoners. Three hundred and three were found guilty of savage crimes of whom all but 38 were pardoned by President Lincoln. The 38 walked to the scaffold in Mankato on 26 December 1862 in warpaint and feathered headdresses, to be hanged simultaneously on one massive set of gallows.

Henry S. Wellcome did not attend the hanging but he kept this print of it, and later described the Sioux uprising (rather undramatically) as “the most interesting event of my life”. Though he might have been expected to have lost his respect for the Native Americans, in fact he reacted in the opposite way. He recognized the historical reasons for their hostility to the settlers, appreciated their culture from the anthropologist’s point of view, and — from a room in the Arlington Hotel in Washington, D.C. — worked tirelessly in later life to prevent further injustices. 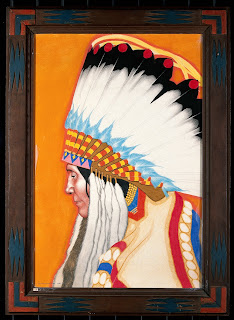 The series of pastel portraits which he commissioned from the artist W. Langdon Kihn in the 1920s demonstrate his interest in preserving their vanishing culture. The example shown here retains its original frame: a Jazz Age record of Native American decoration.