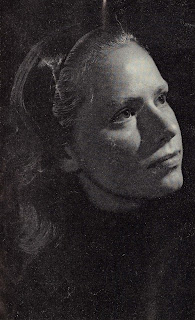 The Wellcome Library is not known particularly for its holdings of musical celebrities but the archives often reveal some unexpected items. The fate that struck the talented cellist, Jacqueline du Pré does fall within the Wellcome Library’s remit however, given that it was multiple sclerosis that robbed her early of a longer brilliant musical career. Readers would not expect to find material from her within the personal papers of the serologist Arthur Mourant, that have just been digitised as part of a wider project dedicated to “Modern Genetics and its Foundations“.

Yet, here we find correspondence of a very personal nature that reveals the close relationship that Mourant had with her Jersey-born family. In one letter dated 9 September 1942 from Jacqueline’s father, Derek du Pré, Mourant is invited to be god-father to her older sister, Hilary Anne (File ref: PP/AEM/A.262).

Mourant’s papers include several other letters from Derek, many press cuttings from the 1960s relating to Jacqueline’s brilliant career and private life as well as all Jacqueline’s concert programmes and tickets Mourant attended.

In his autobiography Mourant includes childhood reminiscences of Jacqueline’s sister, Hilary and his relationship with the Du Pré family. She remembers him as a warm and generous man who played with the Du Pré children and “took delight in listening to their weekly concerts”. Mourant was known as the ‘Pied Piper’ in the children’s games, as well as ‘Lalla’ and ‘Uncle Arthur’ (Blood and Stones: an autobiography by A.E. Mourant, La Haule, Jersey: La Haule Books, 1995, p.96). A bachelor until late in life, Mourant enjoyed feeling a part of their family. Also within the papers is a poem that is dedicated to the musically gifted Jacqueline, here re-named ‘Dame Josephine’: 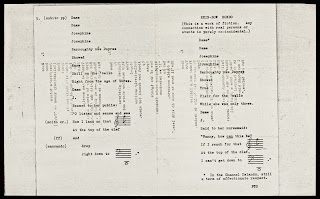 It is touching to find Mourant retained an undated drawing given to him by Jacqueline when she was very young. 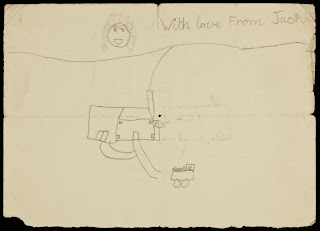 The drawing sits in the archive alongside a letter dated March 2nd 1961 from Jacqueline to Mourant: “Dear Uncle Arthur, what a wonderful bouquet! It gave me such pleasure when I came home and arranged the lovely variety of Spring flowers (at 3 a.m!)… with lots of love from Jackie”. This letter was sent the day after her debut concert at Wigmore Hall at the tender age of 16 – his brochure and ticket are retained within the same files (PP/AEM/A.267): 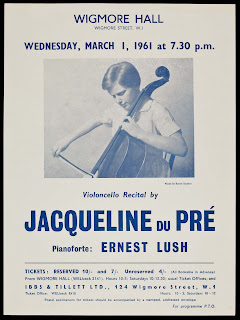 Just over 10 years later after extensive concert performances, Jacqueline was forced to retire from the platform apparently from ‘nervous exhaustion’ that was later correctly diagnosed as multiple sclerosis.She died at the age of 42 on 19 October 1987.Following du Pré’s diagnosis, Mourant wrote a letter in Feb 1972 to R.J. Berry of the Royal Free Hospital, London requesting information about the disease according to a responding letter dated 23 Feb 1972 containing multiple-sclerosis statistics (File ref: PP/AEM/K.194).