Arguing on the telephone 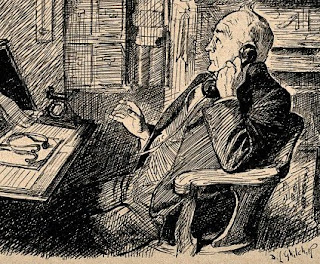 On this day in 1876, one hundred and thirty five years ago, Alexander Graham Bell patented the telephone that he had spent the previous two years developing.

Obviously since that day the telephone has been used as widely by medical men and women as by the rest of the population. The number of lives saved simply by our being able to dial 999 (or 911, or whatever other number applies in our country) and summon urgent medical assistance, defies any attempt to calculate it. Less well known, however, is the medical element in the story of the telephone’s development. Alexander Graham Bell was born in Edinburgh in 1847, the son of Alexander Melville Bell (1819-1905). Bell senior was a speech therapist and elocutionist, and his own father, Alexander Bell (1790-1865), grandfather of the inventor, was also an elocutionist.

Alexander Graham Bell moved into the family specialism: after education at the Royal High School in Edinburgh he spent some time in 1862 learning from his grandfather in London before teaching both music and elocution as a pupil-teacher in Elgin. He studied at Edinburgh University for a year before returning to Elgin as a master in 1865; however, in 1867 he moved to London, joining his father who had taken on the work of the senior Alexander Bell. Here he studied anatomy and physiology at the University of London, and became skilled at teaching the deaf. In 1870 Bell and his parents emigrated to North America; here Alexander Graham Bell continued his work with the deaf, becoming Professor of Vocal Physiology and Elocution at Boston University in 1873.

From work with the deaf, then, grew Bell’s interest in phonetics and work on the transmission of sound by electricity, which led to the development of the telephone. Bell built, for example, on work by Koenig and Scott on the translation of sound into visual images via electric impulses: this clearly is a concept of great potential for communication by deaf people. However, once one has worked out how to translate sound into electrical impulses, there is a wide variety of things that can be done with them, and one obvious use is to transmit them over distance and then reverse the process, turning them back into sound: the modern telephone. Bell spent much of the winter of 1874/5 in experiments and in summer 1875 demonstrated a system that used a diaphragm to translate sound into electrical impulses, transmit it down a wire using various interrupted tones of different frequencies, and translate it back into intelligible human speech at the other end using another vibrating membrane. In spring 1876, he patented the system, having already set up a company to exploit it: commercially, the rest is history. As early as 1878, Bell was demonstrating his invention to Queen Victoria, MS.8748 in the Wellcome Library comprising a letter written by Bell about this occasion. His telephone system exploded across the world and, arguably, dominated global communications for the next hundred years.

In the English-speaking world, this is often seen as the whole story. However, in Italy in particular another much less well-known figure, Antonio Meucci, also gets a part in the story. Meucci was born in Florence in 1808; he studied chemical and mechanical engineering at the Florence Academy of Fine Arts and later worked at the Teatro della Pergola in Florence as a stage technician. In 1834 he devised a form of acoustic telephone to communicate between the stage and control room at the Teatro, modelled on ships’ speaking pipes. However, his involvement in the turbulent politics of a divided Italy led him to imprisonment and exile: he and his wife left Italy in 1835.

He went first to Cuba, where his work on Mesmer’s theories of natural electricity led him to invent electrotherapy equipment; he is also said to have devised a form of telephone through which inarticulate speech could be detected. His friendship with Garibaldi made him suspect in Cuba and the success of Samuel Morse in inventing the telegraph suggested new opportunities, so in 1850 he relocated to the United States. He set up a tallow candle factory in Staten Island, New York, and used this to finance work on an electromagnetic telephone, constructing various prototypes; however, his finances grew worse and worse and although he filed a patent caveat for one such machine, dubbed the “telettrofono”, in 1871, he was unable to convert it to a full patent and unable to renew it in 1874.

When Alexander Graham Bell patented his telephone in 1876, Meucci sued him for infringement of intellectual copyright; a series of lawsuits went all the way to the Supreme Court, and dragged on for the remainder of Meucci’s life and beyond: Meucci died in 1889 with these issues unresolved but having failed to profit from his inventions. The surviving cases were finally dropped, without decision, in 1897.

There is considerable debate and partisanship on both sides; the issues causing debate can be summarised as whether Meucci’s own patent documents mention a mechanism for converting sound waves into electromagnetic ones and back again, the intelligibility of the sounds transmitted by Meucci’s device, whether or not Meucci described his invention in the New York Italian newspaper L’Eco d’Italia in 1861, all issues of the paper from that period having perished, and the precise dating of some of Meucci’s papers (at one of the court hearings he was accused of having fabricated papers retrospectively).

Like an unsatisfactory telephone, the debate has generated noise but little clarity, with the protagonists tending to hear what they want to hear. The Wellcome Library holds as its MS.7323 a dossier of letters by Meucci which were displayed at the 1929 Florence Scientific Exhibition. Fascist Italy of course took it as an item of faith that Meucci had beaten Bell to the punch, but their viewpoint is scarcely unbiassed. As with many other inventions, it seems clear that scientific developments were converging on the telephone and if one person had not invented it someone else would have done so shortly afterwards. Bell, whatever the rights and wrongs of his claim to primacy, certainly had the capital to patent and develop the application; the older man did not. Bell died at his home in Nova Scotia in 1922 on 2nd August; he was buried at 6:25pm on August 4th, at which time all telephone traffic in the United States was stopped for one minute as a tribute. In contrast, in the English-speaking world Meucci is only a sad footnote. Next time you lift the receiver, spare him a thought.

The image of the doctor on the telephone at the head of this post comes from Wellcome Images, image number V0011546, by D.L. Ghilchip (1932).