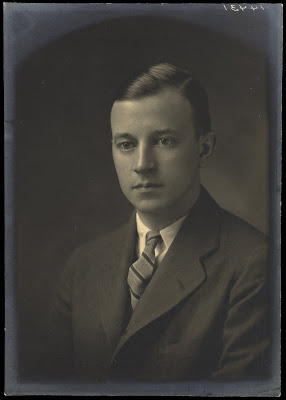 The photograph above, dated 1931, portrays the cardiologist Edward Franklin Bland. Born in Virginia in 1901, Bland spent most of his career at the Massachusetts General Hospital (MGH), where he was an Intern, House Officer, Cardiac Fellow, and finally in 1949 Chief of Cardiology, a post he held until his retirement in 1964. The photograph was kindly presented to the Wellcome Library by Dr Arthur Hollman FRCP, the biographer of Sir Thomas Lewis: Dr Hollman had acquired it as a result of the fact that in 1930 Bland had spent a year on research in Lewis’s laboratory at University College Hospital (UCH) in London. [1]

As a result of Bland’s year with Lewis, the Wellcome Library has in its Thomas Lewis archive (PP/LEW) a letter from Lewis to Bland dated 25 March 1933. Lewis thanks Bland for submitting a paper to the journal Heart (edited by Lewis) but has to decline it because Heart was about to be replaced by a new journal Clinical science. Lewis advises Bland to “cut out a lot of stuff about coronary anomalies” because it “doesn’t really give anything new”: coronary anomalies were a special interest of Bland, and one of them is named Bland-White-Garland Syndrome after him, his former colleague at MGH Paul Dudley White, and Joseph Garland, who was a visiting physician at MGH while editor of the New England Journal of Medicine (and himself the owner of a congenital cardiac anomaly).

Lewis then goes on to offer for Bland’s consideration a view which, in its teleological phrasing, could mutatis mutandis have been written by Galen. Explaining why, if arterial blood is not available, the myocardium clutches at straws by accepting venous blood as being better than nothing, Lewis says “In these cases Nature performs an experiment on the effects of supplying the heart with venous blood. Now in cases of occlusion of the coronary arteries, the heart is thought by some to be supplied by the Thebesian vessels [named after their discoverer Adam Christian Thebesius (1686–1732)]. The Thebesian vessels open chiefly into the right heart so that if the myocardium is supplied through these vessels it is being supplied chiefly with venous blood.” Lewis does not elaborate further.

Finally in this letter Lewis refers to a forthcoming visit by Bland, who must have been about to return to the UK in 1933: “I will talk about them when I see you in a few weeks. We are looking forward to that very much. It is good of you and Jones to drive us about the country.” Jones was possibly T. Duckett Jones, Bland’s co-author in several papers on the heart disease rheumatic fever. Evidently Bland and Jones had offered to act as chauffeurs to Sir Thomas and Lady Lewis in exchange for Sir Thomas’s gifts of physiological wisdom.

One of the puzzling things about heart transplantation from an outsider’s point of view is the sudden emergence to world-wide fame of the previously obscure Dr Christiaan Barnard. 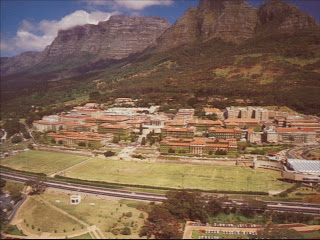 Today, he is probably the only transplant surgeon whose name is widely known, yet when experts talk about the history of transplantation, names of other great figures tend to be mentioned, such as Norman Shumway, Roy Calne, Thomas E. Starzl, and Denton A. Cooley. These worked in international centres of surgical research such as Stanford University in California; Houston, Texas; or Cambridge, England — while the man who beat them to the goal and outshone them all in the public mind was apparently a relative outsider: Barnard, working at the University of Cape Town (above) under the pressures of the apartheid regime of the time. How did that happen?

The recent history of Groote Schuur Hospital by Anne Digby and others [2] shows that research at Groote Schuur had developed after a slow start in the 1950s and flourished until the 1980s, though bedevilled by government policies: in the 1960s and 1970s black students were not allowed to cross the corridor which separated the wards for black patients from the white wards. It really was Barnard’s first transplant operation on 3 December 1967 which put the hospital on the international map.

The background to these events is presented in a vivid lecture given on 25 January 2011 by Dr. David Cooper to the C.F. Reynolds Medical History Society at the University of Pittsburgh. The lecture has been made available on the internet by Dr John Erlen at the School of Medicine, University of Pittsburgh. [3] Dr. Cooper was a surgical associate of Barnard and evidently knew him well. As Cooper shows, there were other names as well, notably “the great John Lewis” (whose achievements in the field went unrecognized) and James Hardy of University of Mississippi at Jackson. Still, Barnard had had the idea of a full human heart transplant in his head for a long time (as Cooper shows from a chance remark made by Barnard early in their acquaintance, while talking about the inadequate treatment a heart patient was receiving). As a result, when he did carry it out, he was remarkably casual about it, showing that he had gone over it in his mind many times without telling anyone. Contrary to legend, Cooper shows that the procedure (apart from a bad patch in the 1970s) was usually very successful in prolonging the lives of patients.

It’s a long way from the work of Edward F. Bland, though there is a connection: Barnard developed his techniques of cardiac surgery in the Tetralogy of Fallot, one of those anatomical anomalies that Bland was so interested in. Bland did live to see the establishment of transplantation: he himself must have been blessed with a good heart, for he died in 1992 at the age of 91. 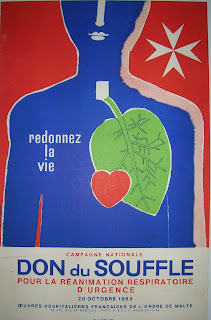 The history of the Knights of Malta (Knights of Rhodes, Knights Hospitallers, Knights of St John) was one of the interests of the founder of the Wellcome Library, Henry S. Wellcome. He acquired a substantial archive of their papers in Paris in 1933 (subsequently returned to Malta), and several iconographic documents, most notably this painting by Antoine de Favray. In recent years the Knights have focused their medical activities on specific fields such as refugees, people with leprosy, and – most conspicuous in Great Britain — emergency services: their British outcrop St John’s Ambulance is a familiar presence at crowded events such as football matches, gigs and royal weddings.

One of their contributions to emergency medicine was a campaign in France in the 1960s called “Don du souffle” (Gift of breath). Judging from this poster (above: Wellcome Library no. 744037i) which sports the Cross of Malta in the top right corner, it was intended to educate the French public in the possibilities of cardiac resuscitation. The heart — a small organ normally enveloped by the larger lung — is here brought into the foreground, being presented as a red berry on the green leaf of a single lung which folds out from the trachea. Highly stylised anatomy, of course, but all in the aid of saving lives by drawing attention to what can be done with the heart and lung.