A History of British Sports Medicine

Dr Vanessa Heggie is a Research Fellow in the Department of History and Philosophy of Science at the University of Cambridge. Here, she describes the background and research to her new book, ‘A History of British Sports Medicine‘. 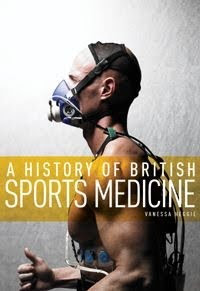 When I tell people I’ve written a book about the history of sports medicine usually the first thing they want to know is when the specialty ‘started’. It sounds like a simple question, but it’s much harder to answer than it might appear…

Sport and Exercise Medicine became a formal specialty in the UK as recently as 2005; but the first British organisation dedicated to the topic was formed in 1952 – that was the British Association of Sport and Medicine, which changed its name in the 1990s to the British Association of Sport and Exercise Medicine. Yet all of the doctors who founded this organisation already had years, and in some cases decades, of experience treating athletes and sportspeople – one attending the 1908 London Olympic Games, where the first dope ban and the first ‘health screening’ for athletes was introduced. Even as early as the late nineteenth century there was a hydropathic hospital known as the “Footballers’ Hospital” in Manchester which specialised in treating injured athletes, particularly footballers.

There is nothing particularly new or modern about doctors and other healers treating people injured while taking part in sports and games – after all, the great Roman authority on medicine, Galen, was a doctor to the gladiators in Pergamon in the second century CE. But to be a medical specialty sports medicine has to be more than just a doctor treating a disease or injury caused by sport (otherwise we should also have ‘craft medicine’ for the treatment of knitting needle injuries or ‘data entry medicine’ dealing with headaches caused by staring at a computer screen). So the history of sports medicine turned into a detective story, where I was searching for the special patient rather than the specialist doctor – that is, a hunt for the moment when athletes stopped being normal people doing sport (and getting normal medical advice) and started becoming something different: supernormal, abnormal, atypical, extraordinary.

That point, for Britain, occurs in the early twentieth century, somewhere between the beginning of the First World War and the end of the Second World War. This was the point when doctors and scientists began to realise that different rules applied to the elite athletic body; that a resting pulse rate below 40 beats per minute didn’t indicate heart disease, but rather exceptional fitness; that for a young woman to stop menstruating didn’t indicate a medical problem so much as her dedication to training for gymnastic competition. This is also when different rules started to be applied to the sportsperson – rules about gender and tests for drug use were introduced into international competition in the 1940s and 1960s, respectively. We find it quite acceptable for someone to take a strong anti-hay fever tablet while at work…unless they’re a professional athlete (anti-inflammatory glucocorticosteroids are banned by the World Anti Doping Agency). Different bodies, different rules.

Having a really distinct patient group is great for the formation of a specialty (we also have specialities dealing with the young and elderly patient: paediatrics and geriatrics). But it can become a challenge when that speciality has to take its knowledge about strange, different athletic bodies and apply it to normal, everyday bodies. This is exactly what happened at the end of the twentieth century, when there was a boom in sports participation by the general population at the same time as new research began to show that sport and exercise were needed to ward off the diseases that our sedentary lifestyles tend to give us – obesity and heart disease in particular. This is why Sports Medicine became Sport and Exercise Medicine: these experts now have to know about school sports, post-coronary patients taking exercise ‘on prescription’, Olympic athletic diets, and the needs of the ‘worried well’ trying to maintain a healthy weight. Switching between these groups is not easy, and it’s a problem faced elsewhere in sport too, for example in the need for Olympic ‘legacy’: a swimming pool designed for Olympic competitors is not necessarily going to be the ideal pool for mixed community and leisure use; a sports drink tested on elite runners will not necessarily help me burn calories on a stationary bicycle in my local gym. 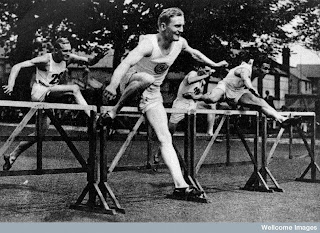 This is the first book on the history of sports medicine in Britain, and the first to hunt out the patient, rather than study the doctor in sports medicine, but it still leaves plenty of questions unanswered. Luckily, the Wellcome Library has some of the materials we need to solve the remaining puzzles. The research for this book was funded by the Wellcome Trust, and as a consequence the archives of the British Association of Exercise Medicine were collected (thanks to my project colleague Dr Neil Carter at De Montfort University) and deposited in the Wellcome Library (SA/BSM). We also organised a Witness Seminar, gathering some of the leading figures in the discipline and encouraging them to talk about their memories of sports medicine in the twentieth century. In itself the witness statements are a rich source of information (available to download here), but Witness Seminars also encourage participants to deposit their own records, photographs and other material with the Wellcome Library (GC253/36). 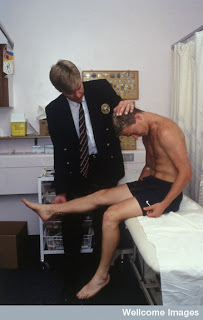 Intriguing stories remain in these archives: British scientists were crucial to the development of the first functional tests for amphetamines, which were trialled at the 1965 Tour of Britain cycling race, and at the celebrated 1966 Football World Cup. There is detailed information about the courses and syllabuses of the first sports medicine diplomas; looking at those can tell us much more about what the pioneers of speciality thought sports medicine really was – is the emphasis on orthopaedics, or diet, or even the psychology of competition? Sports medicine is also a highly commercialised enterprise, with large private provision – not to mention sports drinks, energy bars, and ‘scientifically designed’ running shoes – and the history of the relationship between public and private medicine in this field could tell us a great deal about recent history, and the political reforms of healthcare and research in the 1980s and ‘90s.

And of course, we still need to know what happened to everyone who wasn’t an elite athlete, before Sports Medicine became Sport and Exercise Medicine? Where did injured amateur joggers get treatment in the 1930s? Who advised schools about their physical education curriculum? For this we surely need a history of British Fitness and Medicine, as well as British Sports Medicine…