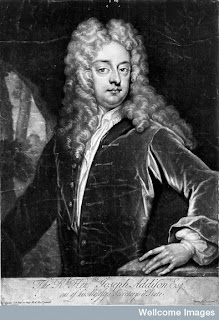 On this day in 1711, the first issue of The Spectator was published [1]. Initially written by Richard Steele and Joseph Addison – though both Alexander Pope and Jonathan Swift contributed to later volumes – it ran every day except Sunday until 1712 and was revived for six months in 1714. It was widely read at the time and consisted of a mixture of news, reviews and commentary. An exemplar of refined thought and wit, The Spectator is recognised as one of the most influential publications of its time. Copies of all eight of its collected volumes are held in the Wellcome Library.

The Spectator provides some choice insights into opinions of medical and scientific knowledge, and their impact upon contemporary society. For instance, an exploration of its volumes finds a discussion of the merits of maternal breast-feeding (December 12, 1711. No 246) and the ill-treatment of children (August 30, 1711. No 157).

Perhaps more expected is the ridiculing of the medical expression, with physicians readily lampooned, whether for their mistreatment of patients (“…we may lay it down as a Maxim, that When a Nation abounds in Physicians, it grows thin of people”) or in their misdirected and painful experiments:

“…there are [other] innumerable Retainers to Physick, who, for want of other Patients, amuse themselves with the stifling of Cats in an Air Pump, cutting up Dogs alive, or impaling Insects upon the point of a Needle for Microscopical Observations; besides those that are employed in the gathering of Weeds, and the Chase of Butterflies…” (both quotes March 24, 1711. No 24).

Those seeking the services of physicians did not escape criticism: with swooning ladies of fashion being gently skewered thus:

“…a great part of Ceremony and Good-breeding among Ladies turns upon their Uneasiness; and I’ll undertake, if the How-d’ye Servants of our Women were to make a Weekly Bill of Sickness, as the Parish Clerks do of Mortality, you would not find in an Account of seven Days, one in Thirty that was not downright Sick or indisposed…” (August 14, 1711. No 143)

The Spectator can also be accessed remotely by Library users through the Burney Collection. For more detail on the themes above, see Fielding H. Garrison, ‘Medicine in the Tatler, Spectator and Guardian’, Bulletin of the Institute of the History of Medicine, Vol. 2, No.8 (1934), pp477-503.

[1] The Spectator’s weekly namesake, which is still published today, is a different publication which was launched in 1828. Trench Journals and Unit Magazines of the First World War