Professor A and Professor B discuss Darwinism in Berlin

The idea of man’s evolution from animals is an ancient one. Some statements on the subject by the Greek philosopher Anaximander (ca. 610–after 546 BC):

“The first living creatures were born in moisture, enclosed in thorny casings, and as their age increased, they came forth on to the drier part, and when the bark had broken off, they lived a different kind of life for a short time.”

“In the beginnning man was born from creatures of a different kind, because other creatures are soon self-supporting, but man alone needs prolonged nursing.”

“There arose from heated water and earth either fish or creatures very like fish; in these man grew in the form of embryos retained within them until puberty; then at last the fish-like creatures burst, and men and women who were already able to nourish themselves stepped forth.”

“Living creatures came into being from moisture evaporated by the sun. Man was originally similar to another creature, that is, to a fish.” [1]

After a very long period of sometimes low-level and sporadic interest in the matter, the idea of evolution came to the fore in the public mind as a result of the storm over Darwin’s and Wallace’s theory of natural selection, proposed in 1858 and published in book form – On the origin of species – in 1859. 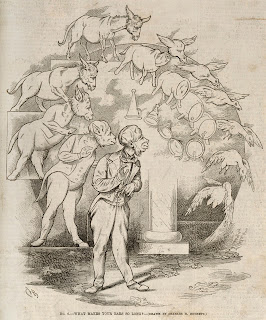 Familiarity with the theory is evinced in the pamphlet wars and caricatures published in the wake of those publications. Among the caricatures popular with today’s historians are the clever circular drawings ‘Studies in Darwinesque development’ by Charles Henry Bennett (1829-1867) which were first published as a weekly series of wood engravings in 1863 (left: Wellcome Library no. 12105i) and republished posthumously in book form (Character sketches, development drawings and original pictures of wit and humor) in 1872. [2]

A set of twenty coloured caricatures, hitherto little known, was produced in Berlin probably soon after the translation of the Origin of species into German in 1860. The full set has now been published in the Wellcome Library catalogue as Wellcome Library no. 680406i. 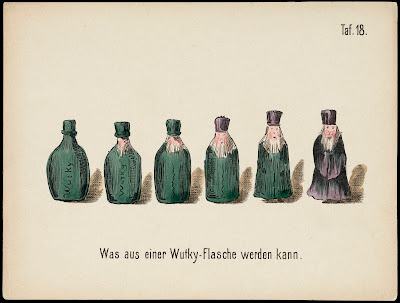 The designer was one Friedrich Schmidt, who also lithographed and published the prints. They consist of twenty coloured lithographs showing in most cases the evolution of a household article into a human or animal type. Some of the human types are universal (an old lady, a teenage girl, an old man with a long beard), while others for historical reasons occur particularly in the eastern half of Europe: of the twenty plates, six show the evolutionary origins of Russians or Croats, such as a Russian priest coming into being from a vodka bottle (above); a waggon evolving into a Croat in a greatcoat (below); how, from a Russian helmet, a dove of peace comes into being. 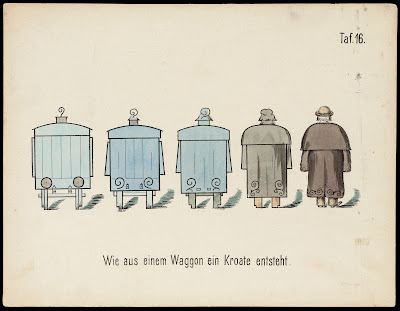 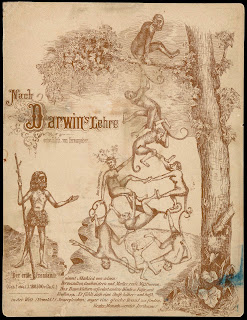 The evolution caricatures are introduced by monochrome lithographs of two rather obscure drawings on the title sheet. In one of them the first ape to evolve into a man standing erect takes leave of his relatives who are still swinging with prehensile tails. He is called “The first Pre-Adamite (born about 180,500 B.C.)”. The other drawing, on the verso of the same sheet, contains a “Discussion between two professors of mathematics (A and B) about (Pseudo-)Darwinism”. The two mathematicians are reduced to the geometrical configurations which they study. Professor A says he finds it difficult to clarify the distinction between the prevous theory of generatio equivoca and Darwin’s doctrine, so Professor B replies that he has created the twenty drawings to demonstrate it. Between them are four geometric figures with human faces and the lettering in English “Pretty faces and some sharp lines”. Perhaps a reader can explain the origins of the designs and the meaning of the allusions? 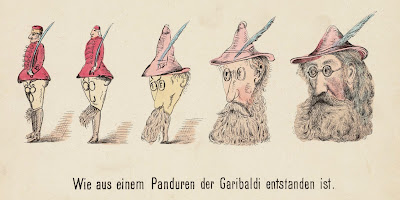 In one of the prints (above), Garibaldi evolves from a Croatian guard (Pandur). This reference may help to date the series more precisely.

The set is surprisingly rare: the only other copy traced is in the Niedersächsische Staats- und Universitätsbibliothek Göttingen, and is identified from its description in the bibliographic database WorldCat.

Its rarety explains why it was not known to Professor Janet Browne when she wrote her article [3] on Darwin in caricature (she kindly examined the Wellcome Library’s set in 2010); nor was it in Pamela Kort’s 2009 Frankfurt exhibition catalogue [4]; nor currently in Mark Aldrich’s website Cartooning evolution, 1861-1925. [5]

However, all these sources can be recommended for providing the context in which these caricatures by Schmidt themselves “came into being”. For instance the fact that a cartoon similar to one of Schmidt’s was published in Fun (a rival to Punch), 31 October 1888, as recorded in Cartooning evolution suggests that he may have had some slight influence on other artists, in addition to amusing his Berlin audience with his preposterous fantasies based on Darwin’s doctrine. 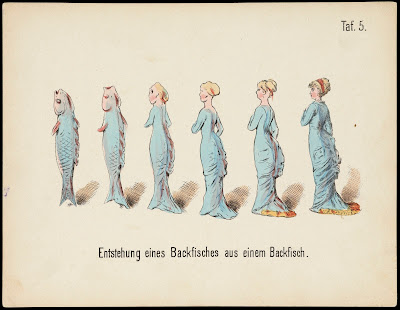 And despite the huge gulf in chronology and language, his sequence showing the evolution of a fish (Backfisch) into a teenage girl (also called Backfisch in slang of the time) would surely have been comprehensible to Anaximander.

[3] Janet Browne, ‘Darwin in caricature: a study in the popularization and dissemination of evolution’, in The art of evolution, edited by Barbara Larson and Fae Brauer, Hanover, N.H.: Dartmouth College Press, 2009, pp. 18-34