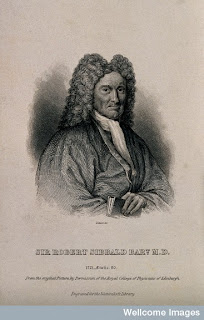 Physician, Geographer, Antiquarian… the activities and interests of Sir Robert Sibbald – born on this day in 1641 – mark him out as one of the most interesting and influential Scotsmen of the the late seventeenth century.

The third son of David Sibbald, keeper of the great seal of Scotland, Robert Sibbald made the most of his social connections in life, rising to become physician-in-ordinary to the King, Geographer Royal for Scotland and also the first Professor of Medicine at the University of Edinburgh. Perhaps most importantly, he was one of the founder members of the Royal College of Physicians of Edinburgh, being elected as its President in 1684 (the Library of the College is named after him).

Sibbald can be seen as an examplar of early Enlightenment thinking: his interlinked interests were central to his aims in rationalising the value of the natural and human resources of Scotland. Or, in other words he sought the “creation of useful natural knowledge” [1]. To Sibbald, attempts at promoting the economic interests of a nation, could only properly be achieved after a detailed survey of its resources was completed.

Although Sibbald’s attempts at such a “Scottish Atlas” remained unpublished, the Wellcome Library holds copies of two works, The history, ancient and modern, of the sheriffdoms of Fife and Kinross and Description of the islands of Orkney and Zetland, which stemmed from the collection of correspondence which the unpublished work was based upon. We also hold a copy of Auctarium Musaei Balfouriani e Musaeo Sibbaldino, the catalogue of the cabinet of natural history specimens which Sibbald and Andrew Balfour, a close scientific colleague, presented to the University of Edinburgh.

Sibbald was in close correspondence with fellow virtuosi at the Royal Society in London, sharing with them an outlook on how a closer understanding of the world could shape the future prosperity of a society. Indeed, Sibbald tried – and failed – to establish a Royal Society of Scotland, along similar lines to other learned academies.

A key figure in the growth of Enlightenment values in Scotland, Sibbald also had close relations to another burgeoning Scottish interest. Rather painful ones however, as in 1690 he was injured after being struck in the face by a golf club.